Sumant will be now representing India at the World Skills 2019 in Kazan, Russia next year.

BENGALURU: Sumant SC becomes the only Bengalurean to win a gold medal and cash prize of Rs 1 lakh in the mechatronics category at the IndiaSkills National competition 2018 held in New Delhi recently. Mechatronics is a technology that combines electronics and mechanical engineering. 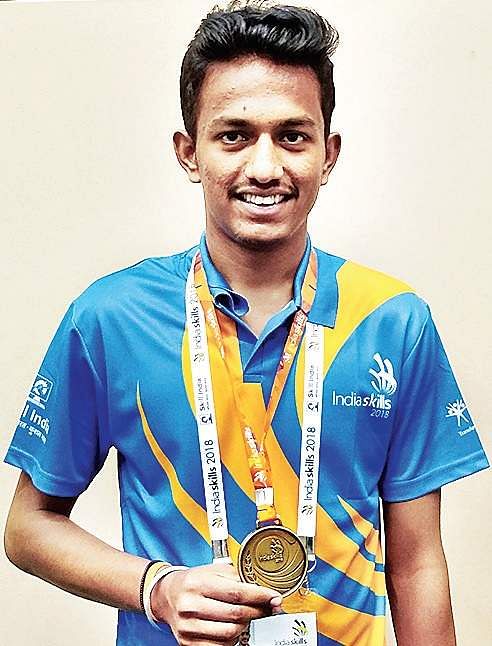 Sumant, a class 10 pass out, could not continue his studies as his parents could not afford his education. His father Chikkabettaiah is a security guard and mother Jayalakshmi a homemaker. After his SSLC from a government school, Sumant enrolled for a free three-year training programme in mechatronics at a renowned car company, following which he took a job at the same company. “The competition was difficult because we did not know what to expect and what models, we’ll have to assemble,” said Sumant who started training for the competition six months ago.

Sumant said that he had been training every day for 10 hours, 8.30 am to 6.30 pm, under the guidance of his trainer J Bhagyashree Patil. “When I returned, my parents were excited that I had won a gold medal for the first time in my life. They called my relatives and informed them.”

The four-day event included six tasks – known, maintenance, two unknown and optimisation task. The unknown task was the toughest, said Sumant, as they were asked to assemble models based on a picture with the kits provided to them.

Sumant will be now representing India at the World Skills 2019 in Kazan, Russia next year. He is currently undergoing training for the same. “I am hoping to win the world competition and bring back a gold again. I want to make my parents proud,” he said.

He was one among 14 participants from six states and different companies to participate in the event. Karnataka won a total number of 16 medals – 7 gold, 5 silver and 3 bronze medals at the competition. The state has also secured one Medallion for Excellence.

Now we are on Telegram too. Follow us for updates
TAGS
Sumant SC gold medal World Skills 2019 IndiaSkills National competition