A bird in hand!

Anup trains five types of birds belonging to the Conure family (parrots) and teaches them to sit on the hand, whistle and sleep!

SHIVAMOGGA: Anup V N, a second-year engineering student from Shivamogga, has a unique alarm right next to his bedroom. He wakes up to the chirping of exotic birds that he grooms at his residence.
For the last four years, Anup has groomed and trained hundreds of pet birds which have now found new homes across the state. He rears the birds when they are a few days old and his hobby has now earned him many customers even out of Shivamogga. 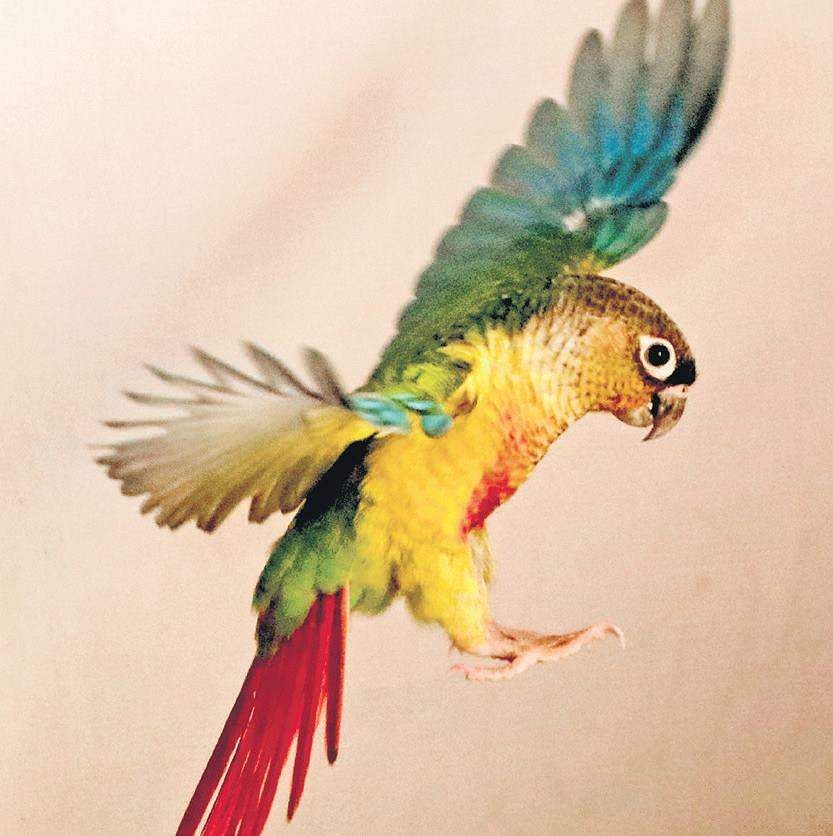 Anup trains five types of birds belonging to the Conure family (parrots) and teaches them to sit on the hand, whistle and sleep! He has been living with the birds since he was in 8th standard.His interest in birds was triggered by the fact that he had more than 200 pigeons on his terrace and would interact with them.

“For any bird to get acquainted with its owner, one has to spend as much time as possible with it,” says Anup. “Once the birds are 40 days old, I start spending time with them and give special attention in order to put them through the training. The first training is about sitting on the hand and commands like ‘step up’ can be used for making the bird fly and land on your hand. When it listens to the command, it’s very important to appreciate it and reward it with sunflower seeds or millets. Every time it listens to the command, I praise it and say, ‘good boy’, which helps me in getting close to the bird,” he explains.

Anup says that once the bird gets used to sitting on the hand, it can be called ‘hand-tamed’. “Most of the parrots try to bite your hand once they are placed there. But, I train them in such a way that they easily sit on the hand without causing any harm. Some birds may not listen to the commands easily for which I have to separate the birds and spend more time talking to them. Once the birds are hand-tamed, I teach them to whistle,” Anup says.

Though it sounds exciting to live amidst exotic birds at your residence, the care and training are challenging. The birds can often fall sick and nurturing them while they are young requires utmost care. Anup has created his own brooder by fixing small bulbs to regulate temperature. The chicks are required to be kept in 40 degrees C temperature till they are 25 days old. After every feed the birds are weighed and progress is checked. Once they are older than a month, then they are shifted to cages.

Where he gets the birds from
“Each bird costs `3,000 to `4,000. I receive birds from pet shops and breeders in Hyderabad and Bengaluru when they are 15 days old. By the time the buyers take away the birds, they are about two months old. These birds live up to 22-25 years. As they are chicks when sold, they get adjusted to the new owner easily. I do not get attached to the birds. When I keep an exotic bird as my pet, sometimes buyers demand the same bird. It will be heart-breaking for me to part with my pet,” he says.

Anup’s mother Shobha A N supports him. “Unlike many boys of his age, my son stays at home mostly. We like his hobby and he has been doing this for many years,” she says with a smile.“Many pet bird owners do not realise that the exotic birds are meant to be reared in the cage only. Pet birds which do not have their wings clipped escape from the cages and houses. In most cases, they are either eaten by native birds or die of starvation as they cannot find their own food in the alien environment. Upon losing one bird, the pet bird owners, who have two birds, release the other one to freedom, but the bird meet a sad end,” he explains.Being a member of Shivamogga Animal Rescue Club, Anup is also involved in wildlife rescues and treating abandoned pet birds in his city.

HANDLE
WITH CARE
 Birds trained by Anup have found homes in Shivamogga, Ballari, Bengaluru, Hubballi and other cities
 There are over 20 birds in cages made by Anup locally, and at a time he trains about ten birds at his house
 He spends time with the birds three times a day, morning session being the longest
 He cleans the cages, feeds and trains the birds for more than two hours every morning

Having exotic birds as pets is a trend and there are many people who want to keep these birds at their residences. One has to spend time with birds during early morning, early and late evenings. Morning feeding is important which is followed by training
Anup V N, Exotic bird trainer and student of JN National College of Engineering

I have been associated with Anup for more than two years. I had taken a bird from him to Ballari. It was well trained and got adjusted to the new weather. The pet birds require training in the initial
stage and it’s a difficult job Aditya Vattam,Reptile rescuer from Ballari