NIMHANS has dedicated unit for mental health of new moms

Mothers who have just delivered and are suffering from mental health problems are also treated there with their babies, which is the only such exclusive dedicated unit in the city.

BENGALURU : Legendary Kannada filmmaker Puttanna Kanagal’s movie Sharapanjara was shot in the airy pavilions of National Institute of Mental Health and Neurosciences (NIMHANS), and till date, its students are shown the movie for its realistic depiction of postpartum depression. Not far away from those pavilions is the Mother Baby Unit where pregnant mothers suffering from mental illnesses are housed.

Mothers who have just delivered and are suffering from mental health problems are also treated there with their babies, which is the only such exclusive dedicated unit in the city. According to the World Health Organisation (WHO), children of mothers with postpartum depression have greater cognitive, behavioural and interpersonal problems compared to children of non-depressed mothers. 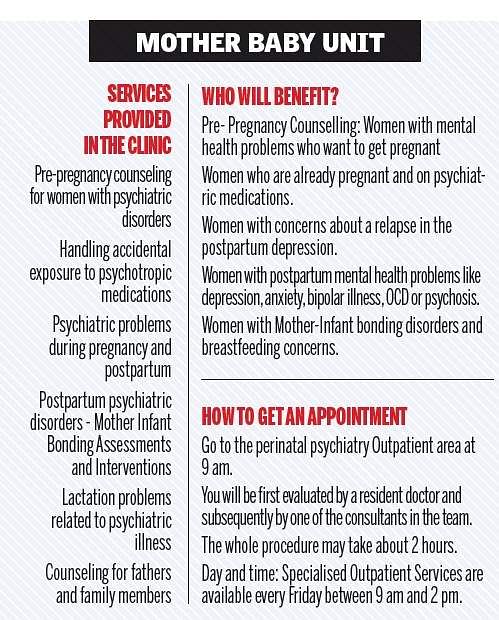 Dr Sundernag, professor of psychiatry, NIMHANS, is one of the consultants at this unit, also called the Perinatal Psychiatry Clinic. “Postpartum depression may include severe psychotic symptoms, bipolar disorders, schizophrenia and catatonia (abnormality of movement and behaviour). Both the mother and the baby have advantage of being admitted together. The recovery of the mother is faster when they are together. This also helps them to bond with their babies,” he said.

The doctors do specific assessments and give advice related to the clinical condition, mother-infant care, safety, breastfeeding and medications. They also assess the infant for any health-related problems and provide referrals. There are also facilities for psychotherapy and counseling in addition to medical treatment. The clinic also gives contraceptive advice and helps in planning future pregnancies.

There are five beds in the unit and are always full round the year. “When women have pre-existing disorders and get married, and get pregnant and then deliver, there are chances that they may not develop an attachment with their babies because of their pre-existing conditions. 19 per cent of  mothers are likely to develop postpartum depression. Also, we do risk assessment on whether she will hurt herself or her baby. Most of the problems starts within the first month of delivery. But the baby has to be breastfed for at least six months. So we help her in her daily activities,” Dr Sundernag said.

Mothers can develop mental health problems even in second and third pregnancies. “We have had older infants too but many a time, they seek help pretty late,” he said. The inpatient services were started in 2009 by the HOD of Psychiatry, Dr Prabha Chandra and the outpatient services were started in as early as 1993. For BPL patients, only on admission, `100 is charged and for APL patients, `100 is charged per day that includes all charges.