Residents collect loads of e-waste over weekend in East Bangalore

BENGALURU: Citizens of two layouts in East Bengaluru, along with NGOs, managed to collect 916 kg of e-waste by door-to-door collection over the last weekend. On Saturday and Sunday, both adults and children went to individual houses in the layouts with gunny bags and collected waste electronic equipments — laptops, personal computers, chargers, cables, modems etc. The drive was part of a campaign by two NGOs — ENSYDE and Saahas — to collect e-waste from different localities and dispose them in a proper manner. 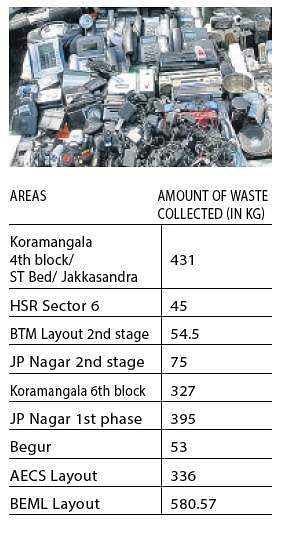 Manvel Alur, CEO and Founder of ENSYDE, said, the campaign was started in 2016, and the door-to-door collection drives were started in June 2018. Earlier, the drives involved street plays, competitions for kids and awareness drives.

The NGOs usually work with RWAs or corporations, who send volunteers, and inform them 2-3 weeks before the date of drive. “Then, we map out the area, depending on the number of houses. The waste is collected in gunny bags and loaded onto an electric van which moves around the area,” Alur said. The collected waste is sent to either E-parisara or 4R-Recycler — agencies which dispose e-waste in an eco-friendly manner.

Anuradha Govind, a resident of BEML Layout, said, when she and other residents were approached with the plan, they considered it to be a good opportunity as there is no e-waste collection centre nearby. “We have an active community and had expected about 20 volunteers to turn up. However, to our surprise, 20 adults and 15 children arrived,” Govind said.

We also collected a few heavy gadgets, such as washing machines and TV sets, and only stopped when the van carrying the waste was full,” she said. Till now, over 18 tonnes of e-waste has been collected through the intiative. The NGO also has 40 public bins located across the city to collect e-waste.To organise a drive in their respective areas, citizens can contact ENSYDE via their Facebook page.

Now we are on Telegram too. Follow us for updates
TAGS
East Bengaluru e-waste residents collect waste