Citizens board train from Yeshwanthpur to push for suburban rail

The 2.55-pm suburban train from Yeshwanthpur had a festive atmosphere on Friday as dozens of citizens undertook a “rail yatra” to highlight the need for suburban trains as public transport.

BENGALURU: The 2.55-pm suburban train from Yeshwanthpur had a festive atmosphere on Friday as dozens of citizens undertook a “rail yatra” to highlight the need for suburban trains as public transport.
As part of #ModaluTrainBeku rail yatra, volunteers of Citizens for Bengaluru (CfB) and others boarded the Yeshwanthpur-Hosur train en-masse at Yeshwanthpur. They were joined by other citizens in the stations that followed.

Several citizens were armed with banners and shouted slogans like “beke beku, train beku.” This was also a way for the citizens to project an alternative to the porpsoed elevated corridors.

CfB volunteer Suraj Chhabria, aboard the train, said the initiative had received a great response from citizens, who had occupied about one-and-a-half coaches on their own.

The citizens travelled until Hellalige, a station near Electronics City, and highlighted the fact that IT professionals could use the train to commute to work. “This station is the gateway to the IT centre of Bengaluru. I request CEOs of major IT firms to take a ride on this train and experience its comfort. No amount of road building can carry as many people as a train,” CfB member Tara Krishnaswamy said.

CfB member Srinivas Alavilli said the train goes along the Outer Ring Road, which is also a part of the IT corridor and hence could cater to techies. “Biggest traffic jams and most railway lines are along ORR. This is the very definition of a low-hanging fruit,” he said. 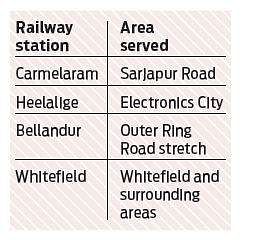 Now we are on Telegram too. Follow us for updates
TAGS
Suburban rail Citizens for Bengaluru rail yatra