On the first death anniversary of Gauri Lankesh, CE speaks to Chidanand Rajghatta, former husband of the slain journalist 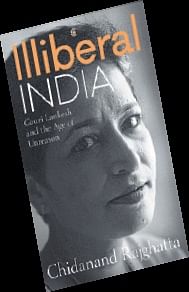 BENGALURU: On the first death anniversary of Gauri Lankesh, CE speaks to Chidanand Rajghatta, former husband of the slain journalist, who recently published his book, Illiberal India: Gauri Lankesh and the Age of Unreason. Excerpts:

What do you think about the investigations that have been carried out so far?
My sense is the SIT has done very well in pretty much cracking the case and connecting the dots pointing to a larger right-wing conspiracy of eliminating intellectuals who are not dogmatic. Whether justice will be served is hard to say because the perpetrators live in a political eco-system that is currently sympathetic to their narrative of grievances, to their vision of nationalism. The prosecution mechanism in India is also notoriously slow and weak and often the good work of investigative agencies is undone by the slow judicial process. But the good news is merely unravelling the plot has alerted us to the rise of right-wing extremism, which is as much a danger as left-wing extremism.

CBI findings reveal that the same pistol was used in both Narendra Dabholkar and Gauri Lankesh's murders. Do you think this investigation will crack the connection of the other killings conducted similarly as Gauri's, that you mention in your book?
I had already mentioned in my book that all four cases involving the assassination of iconoclastic, dissenting writers and intellectuals appeared to be linked and I had also dwelt on others such as KS Bhagwan being on the hit list. It is fairly clear that there is a lunatic fringe that believes in settling scores with guns and violence; they lack the capacity to engage in a dialogue or conversation. Poorly educated and brainwashed, they have no spirit of inquiry and have no capacity to process, much less absorb, opinion or beliefs contrary to theirs. The investigation appears to be proceeding on the right track; the very fact that each of these assassinations was celebrated on social media by a lynch mob mentality suggests that they were all interrelated.

Have you faced any threat in any form?
No. Fortunately or unfortunately I live far away, although it’s no surprise many right wing zealots carry their loony extremism abroad too.

In light of the recent arrests of lawyers and activists, and the branding of 'urban naxals', do you think we are heading towards an 'illiberal India’?
There has always been an illiberal streak to India going back ages and decades. My concern and I reflect that in the discussion on the title of my book in the introduction, is that we are on a slippery slope to greater intolerance and illiberalism. There are moments when we seem to be moving towards becoming a rational, progressive, modern society that we ought to be. Then there are dark moments of regression.

Do you think there's a state of undeclared emergency, in terms of freedom that's given to the press today? What would you advise to young journalists in the country?
I don’t think the situation is so dire; some of the caterwaulings on the left is also a bit overwrought, although, in fairness, people who live and work closer to the ground in India should be better placed to make this call. From the distance I am in, I think there is still a great deal of freedom in India. Beyond the traditional legacy journalism, there is also the social media, which can be chaotic, but which also provides a largely unregulated unfettered outlet. Journalists who feel constrained by legacy journalism can always get their word out here — in a responsible way, I might add.

How far can the common man contribute to making sure that democracy is defended?
Very far. The sign of an enlightened society is when the common man is involved in the political process. To be aware of issues, to read and debate them, to register to vote, to know your lawmakers and their positions on various issues from the basic block level to the national level, and being involved in influencing or shaping these positions — these are all gifts of democracy that common folks should embrace.

Indus Water Treaty a technical matter, commissioners of both countries will talk: Jaishankar