BELAGAVI: Thousands of families caught in the floods were evacuated from areas affected by the calamity, in different parts of North Karnataka on Monday, as the Krishna river continued to swell, with Maharashtra releasing about 3 lakh cusecs from its dams, and another 3 lakh cusecs flowing in from Narayanpur dam on Monday.

At least 3,500 people were evacuated from the flood-hit areas of Belagavi district, while five persons stranded at Omkaragadde, an island near Raichur, were rescued by an NDRF team.According to Belagavi Deputy Commissioner SB Bommanahalli, one person was washed away in flash floods at Hulagbali, near Athani, on Monday morning when he went to his flooded farmhouse.

Maruti Jadhav (25), a native of Kudchi, lived in Hulagbali, which is badly affected by floods. After taking all his household materials to a safer place from his flooded house on Sunday evening, he returned to his house on Monday morning to check if he had left something behind, when he was caught in the waters. His body was recovered from the Krishna river, 2km from Hulabgali, according to Bommanahalli.

According to sources, 51 villages were affected by floods in Devadurga and Lingasgur taluks of Raichur district, where the situation continued to be grim, with moderate rainfall recorded through the day. The flood situation in Belagavi district continues to worsen, as thousands trapped in the flooded villages were rescued on Monday in Athani and Chikkodi taluks.

At least 25 low-lying bridges and roads remained under water, bringing vehicular traffic toward Maharashtra on the border to a grinding halt.According to Bommanahalli, 22 gruel centres have been established around flood-hit areas, while another five will be set up on Tuesday, to accommodate thousands of people being moved away from flooded spots. “Given the incessant rain lashing the border, a huge amount of water is expected to flow from Maharashtra into the Krishna in the next 24 hours,’’ he added. 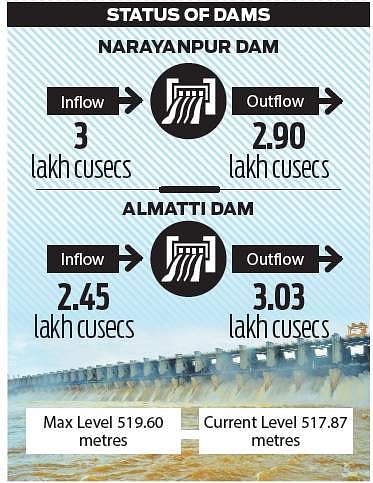 To cope with the situation, the government machinery in Belagavi, Bagalkot and Raichur districts has appointed nodal officers in all affected areas, along with hundreds of rescue teams. Rescue boats and divers also are involved in the evacuation of people and assisting teams of NDRF, police and private agencies.

Despite his scheduled visit to Athani, the worst flood-hit taluk in the state, on Monday, Chief Minister BS Yediyurappa decided to head back to Bengaluru soon after his aerial survey of affected areas in Raichur and Vijayapura districts. According to sources, he had to avoid his tour of Athani due to the inclement weather. However, he held meetings with officials at Raichur and Vijayapura, while taking breaks from his aerial survey. He said he had written to his counterparts in Maharashtra and Telangana to initiate measures to regulate discharge of water to Karnataka to avoid floods. The CM outlined the need to keep a tab on the release of water between the states to prevent floods.

Karnataka State Fire and Emergency Services deployed more than 200 personnel along with boats to undertake rescue operations in all flood-hit areas of North Karnataka, like Belagavi, Bagalkot, Raichur and Yadgir districts, on Monday. Fifty members of the State Disaster Response Force were deployed in Belagavi and Kalaburagi regions. Rescue operations are in full swing in the flood-hit villages of Ingali, Manjari and Yedurwadi in Belagavi district, Vadegera and Surpur in Yadgir district, and Lingasgur and Devadurga taluks of Raichur district. According to sources, 100 Home Guards in Belagavi district and 40 in Raichur district were also deployed in the affected places.

Now we are on Telegram too. Follow us for updates
TAGS
north Karnataka monsoon heavy rainfall

India has to be a key partner in engaging China from position of strength: Antony Blinken