BENGALURU: When Yakshagana remained an art form for the males, and despite the fact that the melas required artistes to go from one place to another and entertain audience even in the dead of the night, a seven-year-old girl was bowled over.It was her father, noted Yakshagana artiste Kolyur Ramachandra Rao, who was on the stage, and a starry-eyed Vidya could not take her eyes off the colourful makeup and the costumes.

Vidya Kolyur, a post-graduate in physics and maths, who was awe-struck with the performances as a child, today runs a troupe comprising male artistes, and she at the helm.With much effort and training, she has honed her team to perform beyond Karnataka --- to Hindi- and Bengali-speaking audience in the North and Eastern India. “Themes like the epics were chosen so that the audience can easily relate to the story,” she says.

She also took her troupe, Yaksha Manjusha, which is empanelled with the Indian Council for Cultural Relations (ICCR) since 2012, to 25 states across India as well as to UMBC University and University of North Carolina in the USA, and the UK where they performed Kannada Yakshagana. They set up an LCD projection where the gist of the scene was displayed in English. The team also took up Yakshagana classes for students of different institutions. 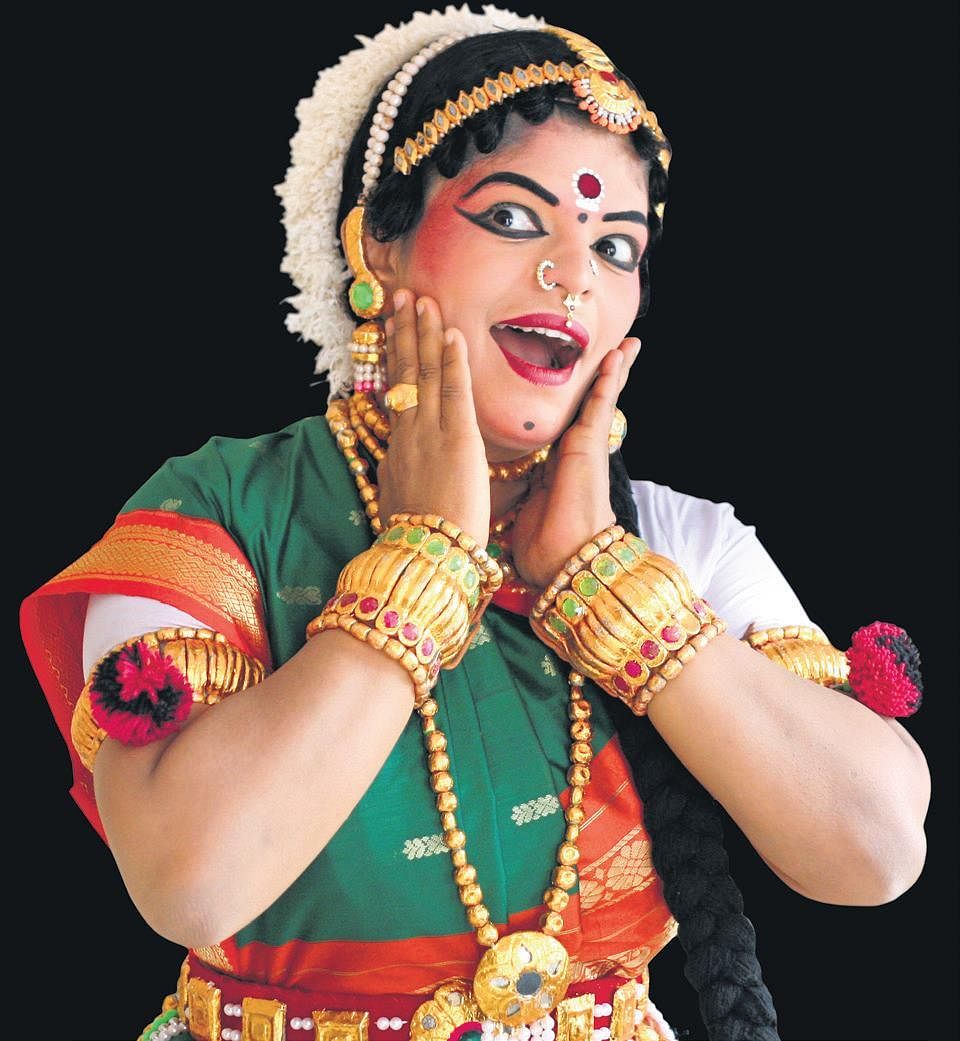 In the last 50 years, Vidya says there have been monumental changes in the art. “From open air to auditorium, from local to global, Yakshagana has evolved, even to adapt to different languages. Today, schools too have Yakshagana competitions,” she adds.She talks about the role of women in the art as audience and artistes. “Yakshagana as an art form was disregarded, to begin with.  The art that began with full-time performers who were travellers and used art to get food into their belly was looked down upon. There were no finances for the art form, nor good costumes. Besides, performances were held from dusk to dawn,” according to Vidya. “How would women go for entertainment late at night,” she asks, about women audience in an orthodox setting.

However, Vidya believes that women have a long way to go in terms of breaking their barriers. Tracing women in Yakshagana to the singers, Vidya says, “There are two forms -- one, the presentation, which is the performance, the dance; and two, Tala Maddale, which is the singing while being seated.”Leelavati Baipaditaya was the first Yakshagana professional singer. “She took Yakshagana as a profession, not a hobby, breaking the orthodoxy. She performed from 9 pm to 6 am in melas, and is the only woman Yakshagana artiste to have performed in a mela and a model for women artistes,” she says.

Besides facing hurdles in terms of taking up male roles for want of a low-pitched voice, Vidya says women still have much to improve upon in terms of team coordination. “A Yakshagana mela has always been team work and not an individual performance, and it is yet to seep through the women performers who are often focussed on their roles. The lack of directors supporting them makes matters worse. This adds to the lack of confidence in the women which also manifests in them learning the dialogues by heart which are supposed to be said extempore,” Vidya says.

She says women have a long way to go in terms of breaking the shackles and touring for shows. “Performers go only as far as Bengaluru and Mumbai as their families object to their travelling to faraway lands.”This was a hurdle she too faced even as she tried to take a team of women to perform abroad -- they excused themselves because of in-laws or kids. She says no women’s troupe has performed abroad.

Vidya says that she too, like women decades before her, faced lack of support from the family in the male-dominated profession -- the reason being the prospects of marriage seeming bleak for these professions.

“However, now, papa is happy,” she says.
While women of all marital statuses seem to take to the art form in recent times, Vidya rues that even today there is not enough recognition for these women. The lack of support was seen in terms of not having documentation of women in Yakshagana, not even in Sangeeta Nataka Akademi, Centre for Cultural Resources and Training or Indira Gandhi National Centre for the Arts, she says.
Lauding the women entering Yakshagana, Vidya says, “The costume is made of wood, and weighs about 20 kg in all. Women artistes play versatile characters, including male characters. They play kings and demons too. “

MORE WOMEN, BUT...
The number of women artistes in recent times has increased in both Tittus (styles) --- Tenkutittu, a southern style, and Badagutittu, a northern style. But women perform Yakshagana as a hobby for three to four hours and are restricted to Karnataka, particularly Dakshin Kannada, according to Vidya

BOTH ROLES
Yakshagana is traditionally a theatre form where we see males playing female roles, this is changing in the recent times and Vidya Kolyur performs and excels in both male and female roles. She performed “valorous heroes” like Abhimanyu and Babruvahana, divine figures such as Rama and Krishna and Seeta, complex characters like Ambe, Dakshayani

CHALLENGES
Vidya Kolyur, a Yakshagana artiste since the age of seven, was inspired by the Yakshagana around her. However, there were challenges, she says. “I asked my father if I could join Yakshagana , he was against me taking it up as a profession. Then he let me join Ranga Pravesh until class three.” Yakshagana grew to be a part of her life. Eventually, she enrolled for Mahila (women) Yakshagana, and then, at 17, she started her own Mahila Yakshagana team

SUGGESTIONS
Dialogues in Yakshagana are extempore, but women write scripts, which should be avoided, says Vidya
Women should learn to put on their makeup and dress up on their own. At present, the men do it for them, and orthodox families wouldn’t approve Books on women Yakshagana artistes should increase. There are a few books including one by Dr Nagaveni Manchi, but more are required

Stay up to date on all the latest Bengaluru news with The New Indian Express App. Download now
(Get the news that matters from New Indian Express on WhatsApp. Click this link and hit 'Click to Subscribe'. Follow the instructions after that.)
TAGS
Yakshagana