Prashanth told his friend Harish Kumar, and the duo hired two others on a contract deal of Rs 1.5 lakh.

BENGALURU: Hulimavu police arrested a 28-year-old woman and her paramour, who attempted to kill her husband after he warned them to discontinue their affair. Prime accused Prashanth had given Rs 1.5 lakh to three people, who barged inside the couple’s house and tried to kill Nagaraj, a carpenter and painter, on  December 14.

Soon after the incident, Nagaraj’s wife Mamatha and Prashanth eloped. The arrested were identified as Mamatha, 28, Prashanth, 30, his associates Anil Biswas alias Khan, 21,  Zakir Pasha alias Jaak, 20, Harish Kumar alias Galagala, 21. All work as delivery boys with a food delivery service and are residents of Arakere on Bannerghatta Road. 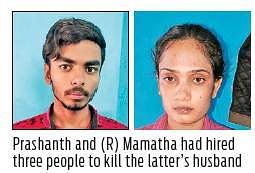 A senior police officer said that Nagaraj had married Mamatha 10 years ago, when she was working at a medical store. The couple is from Andhra Pradesh. Prashanth, who often went to the medical shop to buy medicines for his father, befriended Mamatha. A few months later, when she was searching for a house on rent, as she needed to shift from Bilekahalli, Prashanth offered her a vacant house on his premises, and called her husband.

The couple rented the house, and in the meantime, Prashanth and Mamatha became involved in an affair. Nagaraj noticed this and warned her to stay away from Prashanth. Mamatha discussed this with Prashanth, who hatched the murder plot.

Prashanth told his friend Harish Kumar, and the duo hired two others on a contract deal of Rs 1.5 lakh. As per the plan, three of the accused barged into Nagaraj’s house, attacked him and robbed him of his valuables. They also assaulted Mamatha and snatched her gold ring to make it look like a robbery. The gang was about to kill Nagaraj when Mani, a water supplier, rang the bell, and the accused jumped into the neighbouring building and fled the scene.

An injured Nagaraj was rushed to a private hospital and after he recovered, filed a case with Hulimavu police. The next day, Mamatha eloped with Prashanth and police learnt that she was also behind the robbery. The police gathered information that the duo had gone to Goa, Hubballi and other places in a week.  A team went to Hubballi and nabbed them. During interrogation, Prashanth revealed the names of his three associates who were picked up in the city on Friday.

Now we are on Telegram too. Follow us for updates
TAGS
Hulimavu police