The launch of Bengaluru’s fly dining restaurant Sky Lounge recently created a buzz, with Bengalureans
making a beeline for the themed restaurant.

BENGALURU : The launch of Bengaluru’s fly dining restaurant Sky Lounge recently created a buzz, with Bengalureans making a beeline for the themed restaurant. But now, the mid-air fine dining restaurant has run into trouble with the Bruhat Bengaluru Mahanagara Palike (BBMP) claiming that the eatery has been running without a valid licence. 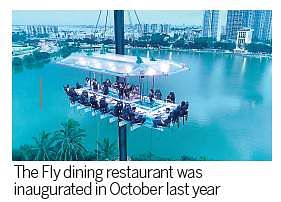 Despite BBMP commissioner Manjunath Prasad having said that the restaurant had been “issued a notice since it was operating without permission” – which led to many fearing that the civic agency would shut down Bengaluru’s newest attraction – the restaurant, located near Lumbini Gardens, continues to serve customers.Managers of the restaurant refute the allegations, claiming that all documents are in place, a claim that the BBMP is still disputing. According to Neha Gupta, CEO of Sky Lounge restaurant, the licences were issued and the operations are permitted.

“We have got necessary documents, including the licence from the BBMP. We are not doing anything which would violate the rules of the government,” said Gupta, The licence, a copy of which City Express accessed, was granted on December 17, and states that Sky Lounge Restaurant has been issued a trade licence for a hotel without air conditioning.

Meanwhile, BBMP said that the licence provided was only for a ground dining restaurant, which does not hold good for the current model, wherein customers are elevated from the ground into mid-air for dining purposes. Sources told CE that the restaurant has now approached the BBMP for the required licence.
“They have now filed for a licence for a fly dining restaurant and the same has been forwarded to the legal cell. If the law permits, we will grant it,” said Nagaraju S, Joint Commissioner (Yelahanka), BBMP.