Constable hurt after tree branch falls on him at Chamarajpet

His son Tejaswi has lodged a complaint with the Central police station in Chamrajpet in this regard.

BENGALURU: Just a few hours after this 55-year-old constable heaved a sigh of relief looking at his health check-up reports, he was in for a rude shock when a huge branch of a tree opposite Makkala Koota in Chamarajpet fell on his shoulder, fracturing his rib cage and shoulder bone. His son Tejaswi has lodged a complaint with the Central police station in Chamrajpet in this regard. 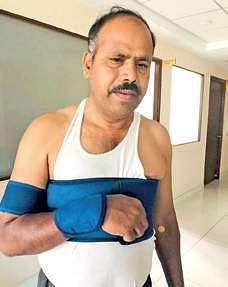 According to Krishna Murthy P T, Head Constable with CAR headquarters, the incident occurred at 5.30 pm on Monday when he came out of the public toilet next to a milk booth opposite Makkala Koota.

“I had gone for a routine health check-up and I was happy that my blood sugar and blood pressure were in control. I came to Chamrajpet to meet a friend. I went to use the public toilet near Makkala Koota. I just came out of the building and suddenly a huge branch fell on my neck and I collapsed,” Krishna Murthy told TNIE.  Passers-by attended to him and informed his son Tejaswi who rushed to the spot.

“The constable’s report shows that he has sustained a crack in his shoulder bone and has a fracture in the ribcage,” said Dr Nataraj K, Orthopaedic Surgeon, who is treating him.

When contacted, Mayor Gangambike Mallikarjun said, “This is the fault of BBMP officials. I have instructed forest cell officials to identify trees with weaker branches. I will take action against the officials if the victim registers a complaint.”