Fusion on the menu

We started off with seven types of their crafted beer samplers.

BENGALURU : Ever heard of a drink which gives out a strong aroma of bacon? Or a samosa which is not the regular triangular-shaped one? XOOX Brewmill in Koramangala surprised us with an array of fusion food that pleased us and made sure it left a lasting impression on our taste buds. Converting an old factory and a manufacturing unit into a brewery in a mill-like setting, XOOX gives the feeling of walking into a three-storied mansion, with their in-house DJ keeping the mood lively.

We started off with seven types of their crafted beer samplers. The low-alcoholic Apple Cider beer was a welcome drink as it was sweet and had a crisp aftertaste. We particularly liked the Belgian Wit, which was again a low-alcohol beer, but had the flavour of coriander and orange. It was a soothing drink to savour. Their newest addition to the beverage menu is Red Velvet Ale. 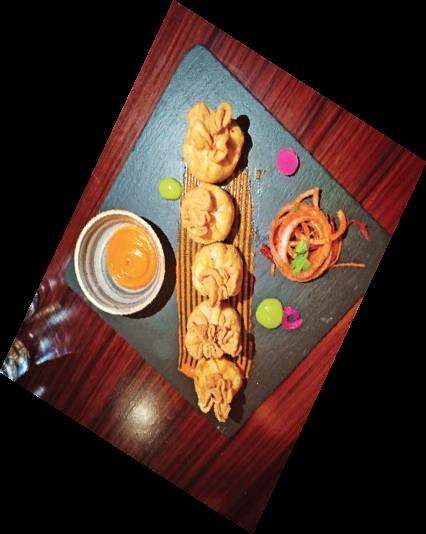 We expected a taste of red velvet cake, but unlike the name, it was missing. Rather, it had an aroma of sweet bourbon vanilla which was unique. If you’re looking for a strong beer, go for Scotch Brown Ale with an alcohol content of eight per cent. Lastly, the Smoked Amber Ale is a must-try. It is purely vegetarian, but has an interesting smell of bacon that we truly appreciated. Happily high, we decided to try one mocktail before moving on to the food menu. Panama Shake is a cooling drink which made us feel light enough to soothe our nerves down.

Just as we were ready for the meal to follow, the chef sent us a plate of Corn and Cheese Mirchi Vada. We were quite pleased with the kind of twist that it had right at the first bite. It was spicy, yet our mouth was filled with melted cheese, which definitely gets a thumbs-up. Along with corn and a dash of lemon, it was one of the best starters we ate this year.

Next, we were suggested Chatpata Chicken Potlu. I was bored of the idea of a typical samosa and expected something new, and hey! This definitely took me by surprise. The succulent diced tandoori chicken sums up for a beautiful filling inside. Served with coriander leaves and makhani sauce, we ate around three each.

We were craving fish, so there came Goan Recheado Fish Tikka. It is Mahi Mahi fish char-grilled to perfection. It was tasty, but could have been a little more soft and succulent. The chef insisted we try out Thai Lemon Beef and Georgian Garlic Cheese Bread, and we thank him for letting us excite our palate. The beef was succulent as it could be, and the cheese breads were more like thin-crust pizzas, with cheese oozing out. We also tried Mangalorean Kori Sukka and Kulcha Non-Veg Platter. The two went perfectly in sync with each other. The chicken was cooked in Mangalorean style, along with beef and chicken kulcha that satiated our hunger to the core.

To end our delicious meal, we were given Besan Laddoo Tart. The presentation took our breath away. The tart tasted exactly like besan laddoo, and to complement it was the raspberry-flavoured filling.
We bid goodbye to the place after a hearty dinner, promising to come back again.