BENGALURU : Boy meets girl, falls in love, parents don’t approve, couple runs away. Anxious parents frantically hope for child’s return, but turn to police to file a missing or a kidnap complaint. While this might sound like the plot of a Bollywood movie right here in Bengaluru, the  community collaboration initiative by the Bengaluru City Police, Vanitha Sahayavani points out that 40 per cent of missing cases involve young teenage couples who elope.

While the number of kidnap cases has steadily risen since 2016 (when 956 kidnap cases were registered) to 2018, when this number went up to 1,111, and the number in 2019 (till January 6) already standing at 33, additional commissioner of police (west) BK Singh said if the cases involve girls under 18 and boys under 21, they are then considered kidnaps. 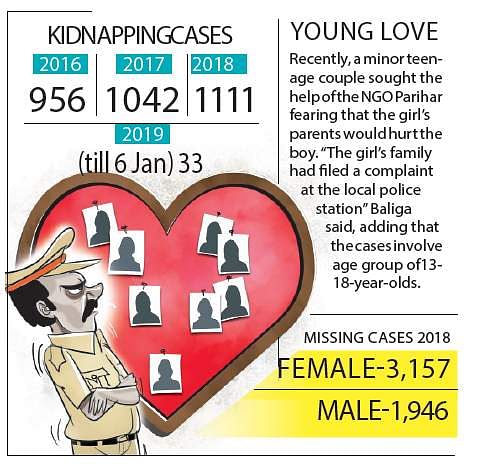 “As for missing complaints which are not classified as kidnaps, most often, complaints are registered by families when girls go missing. Fewer complaints are lodged about boys, which could possibly be one of the reasons for the higher number of missing cases of women.” Records show that 3,157 missing cases have been registered for women compared to 1,946 cases for men in 2018.

Meanwhile, Sahayavani receives a minimum of one case every month wherein parents abandon their daughter after she has gone against her parents’ wishes, forcing the child to turn to shelter homes. “We recently came across a case where the mother disowned the child for having run away with a boy from a scheduled tribe. An NGO took up the case, and is now providing shelter to the girl,” said Preethi Baliga, counsellor at Vanitha Sahayavani, adding that when it comes to teenage love, it important for parents to give the youngsters time.

“Some of them force their child to end the relationship, but that can backfire and the child can turn adamant and decide to run away,” she said.Recalling a recent case, wherein a 14-year-old who had met a 16-year-old boy at tuitions and had run away, but were eventually brought in to Parihar for counselling, Baliga said, “Even though the boy is also a minor, he can be prosecuted for kidnapping and eloping, which is a punishable offence.

Vishalakshi PS, coordinator from Association for Promoting Social Action (APSA) which handles Childline said that the juveniles would remain under the jurisdiction of the Special Juvenile Police Unit (SJPU) even after parents have filed an FIR.