At present, 99 buses operate 686 trips to and from the airport on a daily basis. The service had its first commercial launch on May 23, 2008, and has zoomed in popularity over the years.

BENGALURU: The hi-end Vayu Vajra buses that offer a smooth journey to Kempegowda International Airport (KIA) for Bengalureans from different parts of the city will now run six more routes to cash in on its popularity among fliers.

At present, 99 buses operate 686 trips to and from the airport on a daily basis. The service had its first commercial launch on May 23, 2008, and has zoomed in popularity over the years. 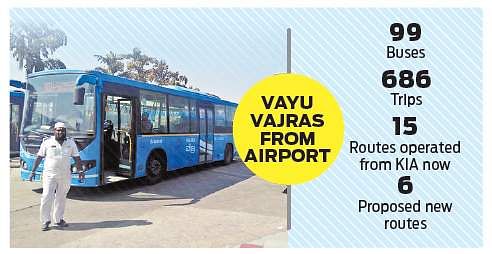 A senior official said, “BMTC was in the process of identifying five or six more routes leading to the airport to boost its ridership and revenue.” From an average of 7,000 to 8,000 passengers per day in 2017, the occupancy figure has now shot up to 15,400 passengers a day in 2018.“It is particularly popular among women who prefer it because it is safer than taxis,” he added. The revenue from Vayu Vajra alone touched Rs 9 crore and 24 lakh last month, he added.

The patronage on Vayu Vajra is much higher from the airport to various destinations. “People are relaxed when they depart from the airport and hop on to these buses. However, when arriving at the airport they opt to come by taxis or get dropped by someone as they are anxious to board their flights,” another official said.

The buses run throughout the day except for 1 am to 3 am. Another senior official said that each bus plies 300km to 400km per day. Fares range from a minimum of Rs 100 (Hunsemaranahalli and KIA) to Rs 320 (Electronic City and KIA), he said.

Stay up to date on all the latest Bengaluru news with The New Indian Express App. Download now
(Get the news that matters from New Indian Express on WhatsApp. Click this link and hit 'Click to Subscribe'. Follow the instructions after that.)
TAGS
Vayu Vajra buses Buses New routes