At 70, runner dreams of fame in foreign lands

In the 1950s, Divakaran S, a then 10-year-old, would walk and run from his school to his home in Poikamukku village in Attingal town of Thiruvananthapuram district regularly.

BENGALURU : In the 1950s, Divakaran S, a then 10-year-old, would walk and run from his school to his home in Poikamukku village in Attingal town of Thiruvananthapuram district regularly. The five km stretch would take a little more than 45 minutes for the young boy. Now, the 71-year-old man runs five kms in just 28 minutes. The septuagenarian who started running in professional races at the age of 55 years has won more than 90 medals at state and national level competitions. He is now heading to Thailand in March for a competition.

During his career in running, his personal best has been 14 seconds for a distance of 100 metres. In a recent competition, Divakaran, who was part of a relay team running 400 metres, ensured that his team finishes in 1.12 minutes. He ran with a team which had athletes aged around 24 years with him being the oldest. 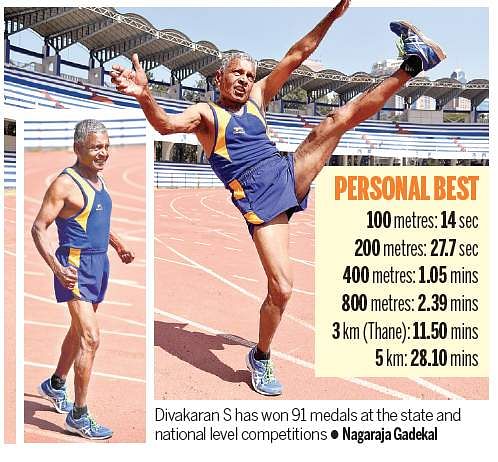 An SSLC passout, Divakaran came to Bengaluru in 1969 to participate in a military selection. That’s when he met noted athlete and coach N Lingappa under whom he trained briefly. “Due to my height (5.1 feet), I was not selected and one of the military persons referred me to a job at ITC where I joined as a casual labourer and then I started working as a sub-contractor. I delivered tobacco to Guntur and other places for 25 years.”

Meanwhile, he joined a local sports club and even became convenor of the club. “Due to my own interest, I used to attend various sports meets in my free time. I would sit as a spectator and watch,’’ he said. In 2003, Divakaran came to know about a veterans’ athlete sports competition being held at Hosakote and that was his launch pad.

“I tried running in the 100 metres race and 200 metre relay. I won third place in the 200 metre race. I realised if I can manage to reach third place without coaching, I could do better with coaching.  I came to Kanteerava stadium and met Lingappa again who was 78 years old at that time.”

“Lingappa, my guru is a tough master. I used to come by bicycle from Banaswadi to Kanteerava. I was 55 years old then. My guru would make me climb steps, do warm up exercises, lift my legs and many other tough workouts.” “In 2002-03, I participated in a national competition in Chennai and I came fourth. But that did not stop me from continuing my training. I even participated in three and five kilometre marathons,” he said.

Divakaran does not have a strict diet – just the staple food like dosa, idli, chapathi for breakfast, rice-sambar and sometimes fish. He neither smokes nor drinks alcohol and has just a mild blood pressure problem. During tournaments, he stays at educational institutes. “But now I can afford to stay separately and my children also ensure I stay in good hotels,” he said. Unable to afford travel out of India earlier, he is now planning to attend an international running event in Thailand in March.