Customs officials at Kempegowda International Airport have identified a new modus operandi by which gangs are smuggling gold from Sri Lanka.

BENGALURU:  Customs officials at Kempegowda International Airport have identified a new modus operandi by which gangs are smuggling gold from Sri Lanka. The gold, in the form of a paste mixture, is hidden in the rectum, which helps them avoid easy detection at airports.

According to sources in the Customs department, this was first spotted a couple of months ago. Officials suspect gangs based out of Chennai and Colombo are using the method to sneak in the precious metal. 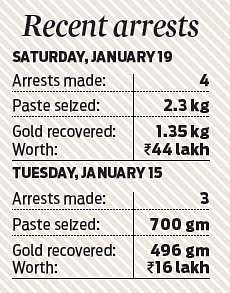 The new mixture
Sources in the Customs department, on condition of anonymity, told The New Sunday Express that the paste is unlike gold and is brown in colour.

“The paste is formed by mixing gold with clay and other substances. The mixture in different ratios, when hidden in the rectum, makes it difficult for metal detectors to detect. It is possible that the detectors can completely miss detection of the metal in the paste form,” the source said.

If the smugglers succeed in getting past Customs officials, the entire mixture is melted to filter out the impurities and extract gold. For instance, in Saturday’s case, while the original mixture weighed 2.3 kg, the actual gold smuggled was 1.35 kg.

Though people have smuggled gold using different methods, the arrest of seven passengers from Colombo in five days, using the same mode, indicates that a gang might be behind the operations.

“There are several gangs that are operating out of Colombo and Chennai. Even the people arrested are either from Tamil Nadu, like the three arrested on January 15, or Tamil speakers from Sri Lanka, like the four passengers nabbed on Saturday morning,” the source said.

However, profiling of passengers based on various parameters ensures that such smugglers are screened and arrested. Moreover, officials will be on alert regarding flights from certain cities, as instances of smuggling are more from some cities as compared to others, the source added.

Now we are on Telegram too. Follow us for updates
TAGS
Kempegowda International Airport Smuggling Gold