The mangrove restoration initiative has brought about noticeable changes in Kota, a village 23 km north of Udupi.

UDUPI: For over 15 years, residents of a village in Udupi district have been building a thick wall on one side of their settlement. The bulwark, which now bears a sturdy, long-lasting look, is an effort to protect the area — from climate change. It is, after all, a “green wall” — a lush mangrove forest, erected  sapling by sapling, year after year.

The mangrove restoration initiative has brought about noticeable changes in Kota, a village 23 km north of Udupi. A footpath stretches away from the main road, meanders around shrubs and palm trees and leads to the small settlement of tiny houses and shops that extend to the edge of the mangrove forest.

This is where a group of villagers from Gundmi and the neighbouring settlements of Parampally and Kodi Kanyana met every day during April, May and June this year, spending time from 8 am to 1 pm to plant mangrove trees in a 15-hectare area. Their efforts have paid off, and 70 per cent of the saplings are growing thick now after having withstood the heavy rains. 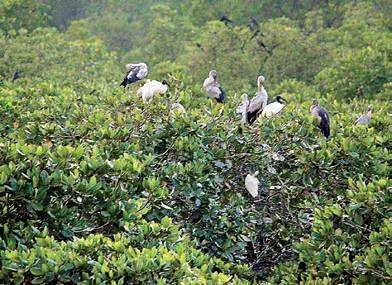 Among the 12 volunteers who planted one lakh seedlings this year was Sathish Thingalaya, who did not miss a single planting session.

Thingalaya, along with other residents like Basava Kanchan, Krishnayya Poojari, Latha, Gauri and Narasimha, initiated this drive in 2003 for the restoration of the mangroves, which had been degraded by human activities.

‘‘Since we started caring for the mangroves, local fishermen harvest more and more fish,’’ says Thingalaya. ‘‘The catch is greater as shoals of fish now come closer to the shoreline to breed.’’

Mangroves, which act as carbon sinks, serve as a vital coastal ecosystem for fishermen. ‘‘Fish rarely breed in the deep sea because the conditions are hostile. Fish prefer mangrove environments so they are protected against predation and strong water currents,” says KM Vijaya Kumar,  Assistant Professor, Department of Zoology, Bhandarkar’s Art and Science College, Kundapur. Restoration of mangroves is essential to mitigate the effects of climate change, he adds.

The idea of restoring  the mangrove forest struck Thingalaya, a farmer, when he heard forest officials talk about the importance of this plant that grows in intertidal zones. He approached them to get an idea about how to go about it. The forest department supported his cause and gave him the necessary suggestions, including forming a volunteer group.

Jeevandas Shetty, Deputy Range Forest Officer of Brahmavara section of Udupi range, says that mangrove forests in the estuaries of coastal Karnataka have started coming up in a big way after the forest department started growing them in 2008 under its ‘green wall’ project. According to the department statistics, over 800 hectares in the estuarine area have been brought under mangrove plantations. The areas are now full-fledged forests that can be developed into eco-tourism spots.

Mangroves act as a boundary, as a coastal guard, between land and sea. These floating salt-tolerant forests are home to several species of flora and fauna, and protect land against natural calamities. Their dense root systems trap rich sediments flowing down rivers and off the land and prevent them from getting washed away to the sea.

These damp, anaerobic swamp areas were once considered wasteland, and were cut to a huge extent to turn the area into agricultural land. It’s only recently that their importance is being highlighted, leading to initiatives to develop and protect them.

The luxuriant landscape is attracting not just marine and winged creatures. It is fast becoming a tourist hub and a photographer’s haven, with many people even venturing deep into them to see the bustling marine and avian life thriving here. While some of them wade into the waist-level water, others use small hand-paddled canoes.‘‘Planting and taking care of the mangrove trees has ensured that visitors come to our village,” Thingalaya says.

Now we are on Telegram too. Follow us for updates
TAGS
Udupi Mangrove forest Green wall Kota