Dr Prathima Reddy: What can middle-age women do to remain healthy?

BENGALURU: Access to health care in India, especially for women, depends on socioeconomic status, caste, religion, geography and cultural factors.  Traditionally, women’s health has received attention only during pregnancy and childbirth. Because of this women suffer more, receive less treatment and ultimately have poorer medical outcomes.

Middle age is defined as “the period of life between the ages of 45 to 60 years, when one is no longer young, but not yet old”.  It is expected that in the next decade 15 per cent of India’s population would be over the age of 40.

According to the World Health Organization, women live longer than men due to biological differences. In India this is approximately three years more than men. Cardiovascular disease, stroke, kidney disease, respiratory disease and trauma are the leading causes of death in women.What are the medical health issues that are more common in middle aged women? 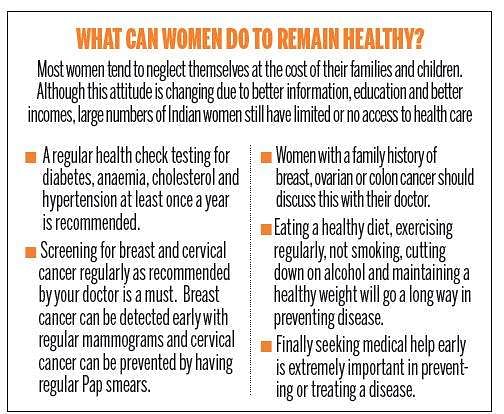 Obesity
Obesity is a rapidly growing problem. Three percent of Indians are obese and 25 per cent are overweight. The factors that have contributed to this are better incomes, lack of exercise and increased consumption of high calorific foods. Obesity increases the risk of heart disease, diabetes, stroke and osteoporosis.

Menopause
The age of menopause in Indian women is between 46 – 48 years. Women going through the menopause can suffer from hot flushes, weight gain, depression and osteoporosis.

Cancer
The incidence of breast, cervix and ovary cancer is higher after the age of forty.  Breast cancer is now the most common cancer in Indian women surpassing cervical cancer which until recently was the most common one.

Depression
Depression occurs more commonly in women than men.  It has far reaching effects if not recognized early. Changes in the hormone levels especially before a period, after delivery and during menopause can increase the risk of depression.  This is apart from the genetic and environmental factors that can contribute to depression.

Pregnancy
In recent times due to the wider availability of IVF (test tube baby), women opting to pursue their careers and thus, putting off pregnancy till later more women are pregnant in their late thirties or early forties. These pregnancies can be complicated by chromosomal abnormalities in the fetus (Down Syndrome), a higher incidence of diabetes and hypertension in pregnancy and a higher incidence of caesarean sections.