Those who were not aware of the route number were unhappy with the app asking for it while they searched for the buses.

BENGALURU: Frequent crashes, server connectivity issues, missing buses, routes and bus stops, bugs and several similar complaints have shot up this January on the Bangalore Metropolitan Transport Corporation (BMTC) app. Downloaded by over 5 lakh users, the app has a paltry 3-stars rating. The latest update on 21 December 2018, has not gone down well with passengers.

An Android phone user commented in the Play Store rating section, “The old version was good but the new one is not working properly. I was not able to track my bus and it is causing me a lot of problems.” Another user complained of buses going both directions and only one direction for a particular stop showing up.

Others complained of ‘the server being down and not getting the information’, ‘the bus not arriving though it shows up on the app screen’ and ‘crashes very often’. Those who were not aware of the route number were unhappy with the app asking for it while they searched for the buses. 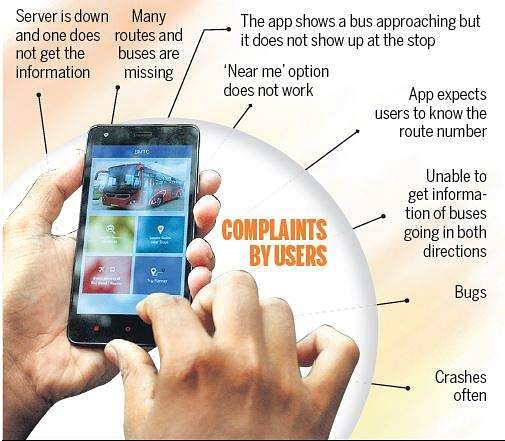 User Ravindra Prasad pointed out that the app design was confusing and waiting time did not show up as well. Several people gave the app a single star after the update. Tanusree Barma, IT director of BMTC said, “It is not a server issue. There were some bugs in the new version that we are now working to fix. There were some errors in the estimated arrival time option. We will upload videos on YouTube and Facebook to educate users on how to use the updated app.”

In response to the complaint on having to enter route number, Barma explained, “He or she should use trip planner, that shall help them identify routes for their destination. They seem to be using ‘stops near me’ option, where they have to select a bus route to know where it is headed.”

Another BMTC official said bugs and issues were being rectified every day. “There is a network connection issue between the Intelligent Transport System (ITS) server and the BMTC app server. There might also be a problem with the user’s phone. If their Android phone is not updated, there might be some compatibility issues,” he said.

He added that entering the route number is not a must. One can look for buses by typing start and end destinations. “In the earlier version, only destinations had to be entered. In the updated version, one can just enter from point A to B, which is why the app shows buses in only one direction. We have to figure out why it is crashing,” the official said.

Now we are on Telegram too. Follow us for updates
TAGS
BMTC app Bangalore Metropolitan Transport Corporation