From faulty storm water drains to bad footpaths, lack of streetlights and bumpy roads, Ranka colony on Bannerghatta road has them all.

BENGALURU: From faulty storm water drains to bad footpaths, lack of streetlights and bumpy roads, Ranka colony on Bannerghatta road has them all. With residents’ demand for action gaining pace with every protest, the local corporator has promised to resolve most issues within two weeks, even if it means he has pay for some repairs from his own pocket.

According to residents, they have been trying to get matters fixed since 2015. “We are 2,000-plus families living here and all of us are struggling. We have been following up on these issues for a long time now, but there has been no change,” said Suresh Prakash, vice-president of Ranka Colony Association for Apartments and member of Bangalore Apartments’ Federation(BAF). Agreed Narayan Hegde, treasurer of Ranka Villa Association, adding that streetlights have been missing for a long time now, which has been a
cause of concern.

In addition, Lekha S, a member of Ranka Colony Association, pointed out that storm water drain being left uncovered has made it impossible for pedestrians to walk in the area.

Officials say that they are on the job and will do whatever it takes to complete the work soon. Nithyanand Kumar, Chief Engineer of Storm Water Department, told City Express that in order to cover the drain, it first has to be concreted. “Only then can the tar be put on it. This is to ensure that the tar doesn’t sink into the drain. I will look into this immediately and make sure the the SWD is properly closed,” said Kumar.

Bilekahalli corporator Narayana Raju said that he is aware of all the issues in the area, and will ensure they are resolved within two weeks. “The road and storm water work will be completed in  two weeks time. Streetlights will also be installed in a few days, for which I will pay myself.” 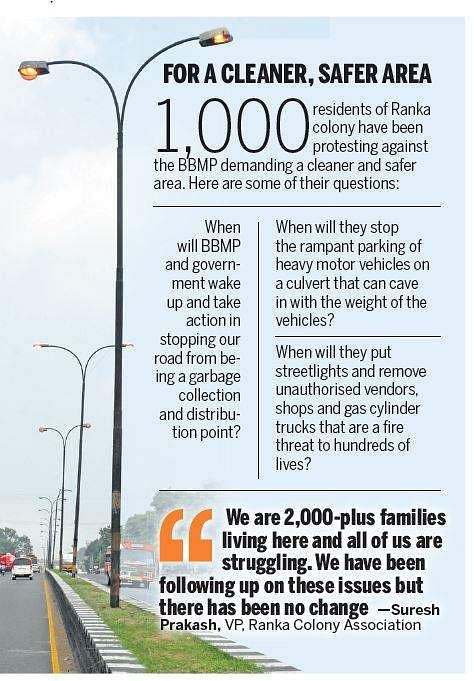