Unni George now has more than 1 lakh followers and a steady income through his YouTube channel.

BENGALURU: Class 10 Board exams. While most of us frantically burned the midnight oil, supplemented ourselves with proteins and prayed to all the gods who could hear us, Unni George religiously went fishing. “I wasn’t great at my studies. Eventually, I failed at my exams which disrupted my education. I liked fishing though,” he says. Founder of OMKV Fishing and Cooking, a YouTube channel with more than 1 lakh subscribers, one can be certain that fishing before his boards could have been a harbinger of his future. 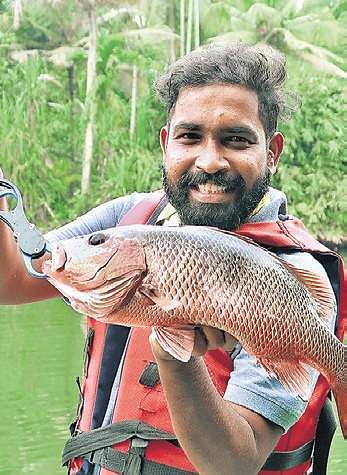 “My interpretation of OMKV stands for Oodu Meene Kandam Vazhi,” the Kumbalangi-native laughs. Unni’s fishing and the cooking channel is distinct from the other culinary ones. He goes fishing and then cooks the fish caught in the middle of a field. The final dish is served on banana leaves and is appetising, to say the least. Nonetheless, he had to encounter stormy seas before OMKV.

“I laboured at construction sites. At 25, I was married and soon after we were blessed with a child. After 2013, I started gaining weight and losing my vision.

Upon detection, my kidneys were found to be in poor health. While my wife was pregnant with our second child, I was diagnosed with kidney failure,” says Unni. With insufficient funds for his dialysis, transplant and medicines, Unni had no choice but to raise the money himself. His story appeared in newspapers, a bus ran in his name for donation in Vypin and his friends sold Rs 100 coupons for a bike. Fate smiled at him, his mother donated a kidney and life seemed to be kind. Not for long. Two weeks later, his wife gave birth. They were out of funds.

Again. And he couldn’t resume his previous job due to health restrictions. “It is extremely difficult to find an appropriate job after a transplant. After ample rest, I began looking into self-employment. I used to look up videos on YouTube for  myself when it struck me that I could start a channel too. Oddly, I didn’t even have the money to recharge  the internet back then. Also, my house had no network. Every day for two months, I’d walk a kilometre away and watch the making of a YouTube channel. But there were other questions.  What kind of channel? What did I want to show viewers? I loved fishing so I decided to capture it on camera,”  says Unni. His friend suggested that he cook the fish he caught.

“There weren’t a lot of videos which comprised both; hence I took the lead. My friend had a DSLR and knew how to edit, so that did the trick,” Unni quips. Knowing that reinventing was imperative on social media and upon requests from his viewers, he decided to upload a fishing and cooking video every Friday and just a cooking video on Tuesday. “The growth was slow but before I knew it, I had 1 lakh followers. YouTube monetised my channel after six months.

And now I earn more than Rs 30,000 per month.  The amount suffices,” he says. Soon, rewards began pouring in. A viewer from Ireland sent him a camera. He acquired a second-hand computer, learnt how to edit and does it all by himself now. “I never mentioned my back story on the channel initially. The last thing I want was more sympathisers. However, after getting 1 lakh followers, I uploaded a video explaining my life story. All I want to do is inculcate a feeling of nostalgia through my videos and make some good food,” he says.

Stay up to date on all the latest Bengaluru news with The New Indian Express App. Download now
TAGS
Unni George OMKV Fishing and Cooking youtube fishing fishing and cooking