At Vimor Museum of Living Textiles, Bengalureans can get a glimpse of ancient weaves and the historical ties and influences on them.

BENGALURU: Forty-five years ago when Pavithra Muddaya and her mother Chimmy Nanjappa started Vimor, a boutique saree store, it was out of sheer economic need.

The store, which went on to build a brand for itself with the likes of Indira Gandhi, Sonia Gandhi and Jacqueline Kennedy visiting it, has now opened a new avenue – the Vimor Museum of Living Textiles.

Located in the quaint bylanes of Victoria Layout, the museum, Muddaya’s house has been utilised for this, is an attempt to showcase ancient, forgotten weaves, and will be a platform for customers to interact with weavers. A walk around the space is a lesson in history.

Every saree has a story – a saree with South-East Asian patterns woven in Tamil Nadu, another with vintage cars and biplanes; a saree with date palms and Islamic architecture; a nine-yard saree with an unusually wide width suitable for a seven-footer. 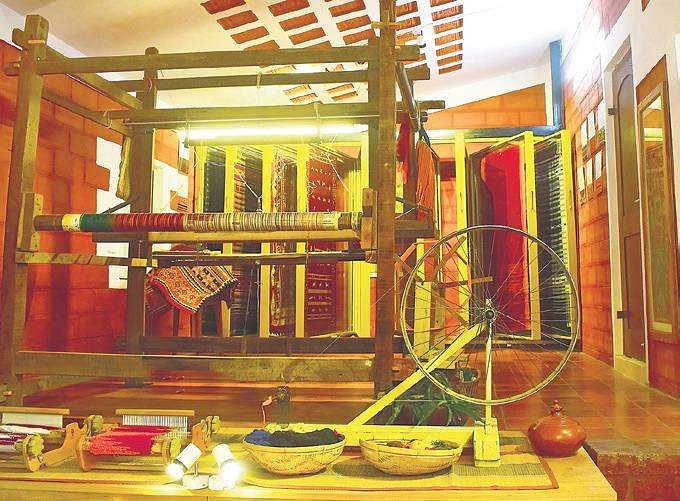 “A lot of them have been donated by family and customers. We don’t have much information about many of them although we have been trying to find out. We’re happy if people come forward with knowledge they can share about these ancient weaves,” says Muddaya, pointing to a saree probably woven in the 30s that has plastic and rayon usage.

The museum also includes some sarees from her grandmother.

She gave a weaver from Benares a hand-drawn design from which he wove this vastra and a matching saree to go with it.

The design shows a peacock on a branch, holding a beaded necklace in its beak.

There are konia or mango motifs placed on all corners, which fall on the wearer’s shoulders, and a circular butta woven in the centre, which sits on top of her head when worn in the Kodava style.

“This was a long-cherished dream. There’s so much to ancient weaves which are a reflection on historical ties. How did a South-East Asian pattern get designed in Tamil Nadu? This brings in the question of trade,” she says.

While they are open to re-creating some of the textiles on display, Muddaya points out that there could be variations in weave, colour and exact designs.

“Reviving sarees is quite a challenge for weavers, especially since it involves a lot of mathematical calculations,” she says, adding that she is hoping to publish a book on the secrets of Bengaluru textiles.

Embroidered in 1909 by Nanjamma Ballachanda, Muddaya’s paternal grandmother, this is a sample of what young Kodava women made, while learning needlework.

The origins of the motifs are hard to attribute except for the medallions, commonly embroidered world over.

Sarees were often woven for children. Hence this length of just 3.15 metres, manageable for a little girl.

It has two pallus, which made it easier for her to handle, in the days when petticoats weren’t worn. The border was woven with interlocking korvai technique.

Legend has it that a Bhadwad shepherd, ostracised for falling in love with a weaver’s daughter, was forced to live with her family.

To earn a living, he would weave clothing from wool his parents gave him on the sly, and became adept enough to learn how to knot beads.