BBMP asks govt to convert 3.9 lakh B Khatas to A Khatas

BENGALURU: The Bruhat Bengaluru Mahanagara Palike (BBMP) has yet again written to the state government to convert over 3.90 lakh properties in the city from B Khata to A Khata. The aim is to increase the corporation revenue. Unassessed properties that regularly paid property tax are considered as B Khata properties, said a BBMP official. However, it seems unlikely that the plan will see the light of the day anytime soon, all thanks to the ongoing political courtesy.

A letter was sent to the government in January in this regard, and then again a fortnight back. But amid the ongoing political turmoil, the civic body’s request has been seemingly pushed to the side. In the letter, the BBMP officials have sought for amendment to Town and Country Planning Act and the Karnataka Land Revenue Act to convert B Khata properties.  By transferring the khata and collecting penalty and property tax, BBMP plans to raise at least Rs 1,500 crore revenue. “This proposal is different from the Akrama-Sakrama scheme where the state government wants to legalise properties. Here, BBMP has requested to regularise constructions and extensions on already regularised buildings and even sites in authorised layouts. Those which are on unauthorised layouts and buildings will not be touched upon,” a senior BBMP official seeking anonymity told The New Indian Express.  In the letter, BBMP officials have made it clear to the government that it will comply with the National Green Tribunal’s orders to ensure that encroachments on storm water drains, lake beds and catchment areas are treated as illegal. Such encroachments will not be considered for conversion.

“Lands other than rajakaluves (storm water drains), corporation and government properties have been considered for this scheme. This is the need of the hour as these people are potent tax payers. With the amount earned from khata conversion, BBMP will be able to repay all its loans and even undertake development and maintenance work of its properties,” the official said.

According to BBMP records, there are 19 lakh properties in Bengaluru under BBMP limits, and so far Rs 3,711.47 crore as property tax has been collected. There is also a 20% gap in revenue collection due to leakages and defaulters. BBMP has a loan of Rs 463.63 crore to repay to the State Bank of India.

Legal and urban experts, however, sound caution. “Many properties in Bengaluru are under B-Khata, where registration is a challenge. Once this happens, the prices of real estate will escalate and state’s exchequer will earn. But this could also open the window for legalising all illegal sites. The government and BBMP  should assess each property before issuing conversion orders,” said a legal advisor to BBMP. 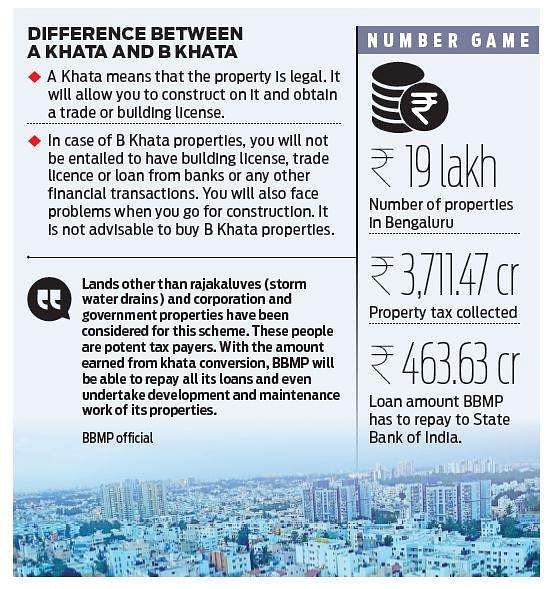 Stay up to date on all the latest Bengaluru news with The New Indian Express App. Download now
TAGS
BBMP