BENGALURU: A four-week audit commissioned by Bruhat Bengaluru Mahanagara Palike (BBMP) to find out the status of Dry Waste Collection Centres (DWCC) in the city found that approximately only 35 percent of them collected dry waste, door-to-door as mandated by the local body. The audit conducted by city-based think tank ‘Sensing Local’ also found that of 167 centres started by BBMP in 2012-2013, only 141 currently exist on ground. 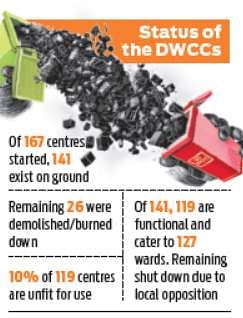 Submitted to the Solid Waste Management (SWM) department on Friday, the audit was done by 27 people, including architects, urban planners, public policy experts, finance planners, waste management experts and citizens. “We found that some of DWCCs were functioning at a lesser capacity, while all of them require renovation and many an upgrade. About 10 percent of them are unfit to be operated as they are located in small spaces. For example, one was located over a storm water drain, against the side of a footpath. Due to lack of space, workers sort waste on the footpath,” Rafiq explained.

Due to lack of monitoring, the system at present has a contractor collecting wet and dry waste, and giving some of the dry waste to the DWCC.
Rafiq said that the workers work in unsafe and unhygienic condition without glove, masks and other gear. Several do not have toilets. “We do not know how five to six workers in each centre, relieve themselves each day. There is no skilling and workers sort waste in a primitive way. A major problem is that different kinds of people are operating the centres like NGOs, contractors, private agencies looking for profit, and some have sprung up locally at the ward level. There is no streamlined approach with MoUs varying locally,” she added.

The audit makes recommendations of categorising DWCCs into three units based on the amount of waste collected. Randeep, Special Commissioner, SWM, BBMP said,” We need a week to go through the audit report. The purpose of commissioning this was to find how many DWCCs were functional, how many can be renovated and how many of them are actually delivering what they are meant to do.”

Now we are on Telegram too. Follow us for updates
TAGS
Dry Waste Collection Centres BBMP Solid Waste Management