BENGALURU: facing an acute shortage of funds, the Minor Irrigation Department (MID) has asked the state government for more funds to manage the city’s lakes. Department officials have said with limited funds, it has become difficult for them. At present, they are paying attention to lakes in 28 districts of the state. Secretary of the Department of Water Resources C Mruthyunjaya Swamy said funds were a major constraint, because of which the MID has been unable to take up many works. The fund crunch has also limited the MID from taking custody of various lakes in the city. 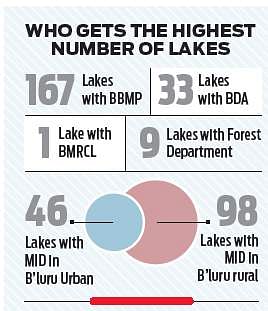 In 2016, the state government had announced the closure of the Karnataka Lake Conservation and Development Authority. All the responsibility of the department was handed over to the MID. Now, it seems like the MID is also becoming a paper tiger like the KLCDA, said an official on condition of anonymity. An MID official said the government sanctioned only `60 crore in 2017, which was insufficient. The MID at present has 31,563 tanks across Karnataka. The MID sanctioned `35 crore for 1,294 tanks under the  Kere Sanjeevini project in 2017 and `25 crore for 268 tanks in 2018.

“Due to the lack of funds, the Bruhat Bengaluru Mahanagara Palike (BBMP), Bangalore Development Authority (BDA) and Forest Department continue to be custodians and maintain the lakes. Even after two years, the MID is yet to take over. This is one of the reasons that the condition of the city’s lakes has not improved,” an MID official said.

Experts say the sorry state of the lakes is attributed to the lack of seriousness of the government. Noted environmentalist A N Yellappa Reddy said the government needs to become serious and take stock of the situation.

He said the Bengaluru Environment Trust and National Law School is preparing a Water Use Act. The first round of meetings were held with the university last week. The state government was asked to fund the research activities, but there was no response. The report will be submitted to the government and court for action.