BENGALURU: How did 15 lakes ‘disappear’ from Bengaluru in a span of just four-and-a-half years?

This is the question puzzling the Karnataka High Court after the counsel for Bruhat Bengaluru Mahanagara Palike (BBMP) submitted a memo to the court on Thursday stating BBMP had 168 lakes in its possession, 17 of which had lost the characteristics of lakes and were being utilised as bus stations, stadiums, office of the Pollution Control Board, revenue quarters, KHB colony and BDA layouts. 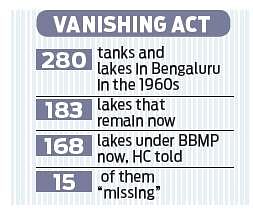 Taking a serious view of the poor maintenance of lakes by the BBMP in its jurisdiction, the High Court asked the state government why it should not appoint the National Environmental Engineering Research Institute for an audit as well as restoration of lakes.

“You can’t destroy lakes because of BDA Layouts, schools and places of worship. It is very disturbing! Destruction of lakes amounts to a violation of Article 21 (No person shall be deprived of his life or personal liberty except according to the procedure established by law) and public faith,” the court observed.

The BBMP had 183 lakes under its jurisdiction, as mentioned in its statement submitted to the court in 2014.

However, on Friday, while submitting its memo, the civic body mentioned just 168, prompting the court to question where the remaining 15 lakes had disappeared in the four-and-a-half years.

Pointing out to the “disappearance” of 15 lakes since 2014 out of total 183 lakes earlier mentioned by Bruhat Bengaluru Mahanagara Palike (BBMP), the High Court orally asked the state government’s advocate to submit a response by Thursday on whether it is willing to appoint an expert agency to conduct an audit of lakes, find out their location, check possibilities of restoring the “missing” lakes, and prevent sewerage from entering them.

The BBMP, while detailing the measures taken for lake maintenance, explained that out of a total 168 lakes, 75 have been fully developed and completed and maintained by BBMP.

In these 75 lakes, the entry of sewage water is completely blocked and only rainwater enters. Work on stopping sewerage from entering 17 lakes is in progress and it will be completed by August 31, 2019.

Out of 168 lakes, 58 lakes were handed over by BDA to BBMP. For 20 lakes, tenders have been invited and finalised and is being sent to the state government for approval while the tendering process for seven lakes is in progress, the BBMP told the court.

Those THAT ARE ENCROACHED

Stay up to date on all the latest Bengaluru news with The New Indian Express App. Download now
TAGS
BBMP bengaluru Bengaluru lakes