People from all quarters of life, including citizens, retired and serving KSPCB officials and BBMP oppose the idea

BENGALURU: A yet-to-be-tabled proposal, where residents will be asked to compost wet waste, has already drawn the ire of experts as well as citizens. Karnataka State Pollution Control Board (KSPCB), has chalked out a proposal for making wet waste composting mandatory at the household level, to be inserted into the building bye-laws of the state. However, even former officers of the KSPCB have criticised the move, terming it irrational and a ‘shifting of burden’ by civic agencies.

On Monday, KSPCB is likely to submit the proposal to the Urban Development Department for tabling before the state cabinet. If approved, BBMP will stop collecting wet waste and will only accept compost from homes. Bengaluru generates around 4,200 metric tonnes of garbage every day and the civic agency has consistently failed in ensuring segregation of waste.

“The proposal means institutions have failed in their responsibility and are shifting the burden onto people. Retrofitting is not possible as an order, people can only be requested. This will lead to creation of more black spots in the city,” said former KSPCB Chairman, H C Sharatchandra.

Meanwhile, residents are questioning the proposal, asking what the government was doing with the money collected through various taxes. “There is a health cess of 26% of property tax collected annually. Rs 50 is paid every month as solid waste cess. In spite of this, apartments have been told to manage their own waste. Many don’t have space to park their cars, where can they compost waste?,” a KSPCB official asked.

However, Chairman C Jayaram said he was optimistic of the proposal finding acceptance. “Individuals can compost within their homes in a small bin for 25 days and then hand it over to BBMP. It is proposed because there is no space in landfills any more,” he said.

Within the BBMP as well, there is a lack of clarity as to how the plan would be implemented. “There is a huge contractors lobby, related to corporators and politicians who earn commissions. They will not let this happen,” said a BBMP official. 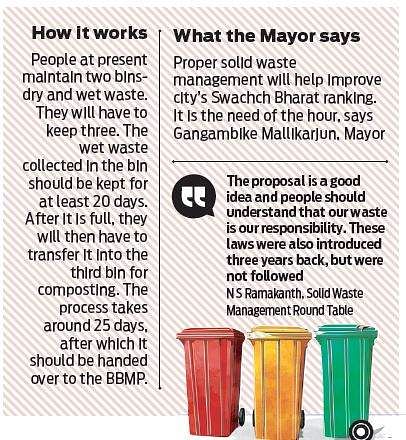 Stay up to date on all the latest Bengaluru news with The New Indian Express App. Download now
TAGS
Karnataka State Pollution Control Board