A 36-year-old BPO employee was found dead in a water sump at his house in Hegde Nagar near Sampigehalli on Friday.

BENGALURU: A 36-year-old BPO employee was found dead in a water sump at his house in Hegde Nagar near Sampigehalli on Friday. Sampigehalli police have taken up a case of suspicious death based on allegations made by his wife that his family had something to do with his death.The deceased Afroz Khan, a resident of Balaji Krupa Layout, was working in a private company. He got married to Meharaz nine years ago and the couple have a child.

Speaking to The New Indian Express Meharaz said, “His family was torturing him since he was not going to work regularly and he was very upset. It is impossible that he jumped into the sump. I suspect foul play behind his death and action has to be taken.” She alleged that Afroz’s family members had something to do with his death. 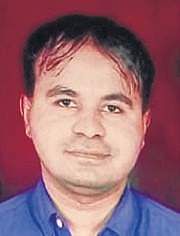 In her complaint Meharaz said, Afroz was working in a BPO on Bannerghatta road, but he was not going to work regularly. Thus she left him eight months ago and came to her mother’s house in Noor Nagar. On Wednesday, he had come to her house on the occasion of Eid. He complained that his mother Kurshid Unnisa and brother Imran Khan were not taking care of him properly and they did not allow him to have food at their house.  After having dinner at his mother-in-law’s house, Afroz left. However, the next day, his brother Imran called Meharaz to tell her that Afroz had gone missing and he was not able to call him on the phone as it was switched off.

Meharaz tried calling him over the phone for a few hours after which Imran informed her that he found Afroz’s body in the sump.

Preliminary investigations revealed that upset over a family dispute, Khan might have committed suicide by jumping into the sump.

An investigating officer said Khan had been missing since Thursday evening. Meharaz was about to file a missing person’s complaint when Afroz’s brother found his body early on Friday.