Bengaluru: Residents repair road on their own

Fed up of potholes, Harlur residents take up initiative to level uneven surfaces to avoid mishaps

BENGALURU: Tired of making repeated complaints to authorities about the bad roads in their area, and staying mute witnesses to their inaction, the residents of Harlur have taken up the task to repair the damaged stretches by themselves. The roads in the locality have been in a shoddy condition for one year after they were dug thrice to lay telecom cables, underground lines and the Cauvery pipeline. Residents say each time the road was dug, it was not covered after the work was over. 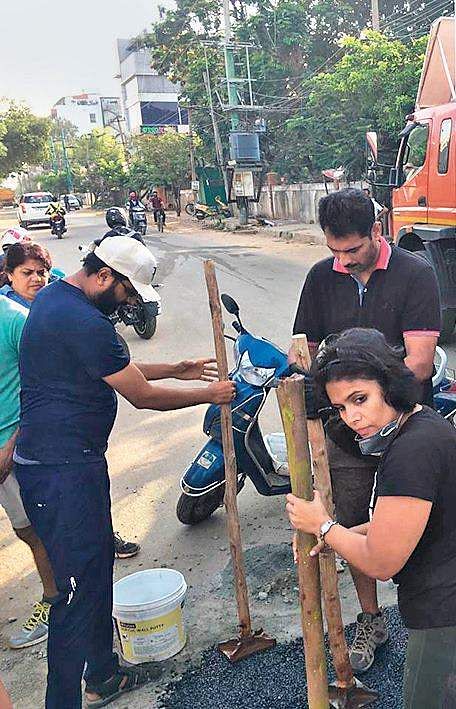 They allege that a 2.5 km stretch has been excavated on one side totally, and the roads have many small potholes and huge craters. It was four months back that they decided to fix the road themselves, but experienced initial setbacks after the initiative was launched. “We initially used jelly stones and covered the road with red mud so that the surface gets at least levelled.

Even though we knew it wouldn’t last long, we tried to do our bit. It used to keep getting dislodged, and we again had to go back and fix it. We tried it for four continuous months and then thought of getting some permanent solution,” Philip (surname withheld on request), a member of Harlur Champions, said. Three weeks back, the local corporator visited the area, saying the roads will be fixed, but no action was taken even after that, they point out.

The residents then decided to take up the challenge themselves and people pooled money to buy 20 bags of cold asphalt, which cost `500 per bag. They also got a roller from a nearby construction site and used it to level the asphalt. “Now the monsoon is approaching, and the roads here are totally dug up, making it highly dangerous for commuters. Since one side of the road is totally dug up, commuters are left with only the other side to use, which also results in traffic jams,” Philip added.

Another resident, Anoop, pointed out that it is a nightmare for two-wheeler riders to commute on these roads. “The road is so bumpy and uneven that it leads to many accidents. People who have met with mishaps also decided to have the roads filled up,” he added. Philip added, “Harlur road comes under Bellandur, which consists of one of the highest taxpayers, and we still don’t have access to good amenities. We pay taxes for the city’s development, but don’t enjoy basic facilities. It is upsetting.”

Stay up to date on all the latest Bengaluru news with The New Indian Express App. Download now
TAGS
Bengaluru