Like rest of India, Bengaluru too fares poorly in diabetes management

A pan-India report by a city-based foundation has found that 80% of diabetics in the country do not have the disease under control.

BENGALURU: A pan-India report by a city-based foundation has found that 80% of diabetics in the country do not have the disease under control. Novo Nordisk Education Foundation released the India Diabetes Care Index, a quarterly report based on data aggregated from diagnostic centres. The data was collected between July and December 2018. The HbA1c level, which is the average of a person's blood glucose level for three months, stood at 8.37% for Bengaluru and 8.36% for Karnataka, while the recommended level globally is 7%.

"The HbA1c level for patients in Karnataka needs to be reduced by 1% or else they will be at risk of suffering complications in the eyes such as vision impairment, nerve damage and kidney failure," said Dr Ganapathi Bantwal, professor of endocrinology at St John’s Medical College and Hospital. 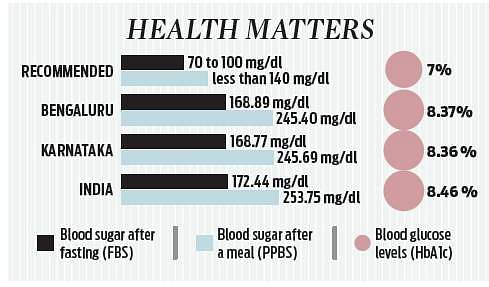 While the recommended figure for fasting blood sugar (FBS) test - the blood sugar level after fasting - is between 70 and 100 mg/dl (milligrams per decilitre), the city average stands at 168.89 mg/dl and the state average is 168.77 mg/dl.The recommended figures for postprandial glucose test (PPBS), which determines the amount of glucose in blood after a meal, is less than 140 mg/dl.

The PPBS figure for Bengaluru is worrisome at 245.40 mg/dl on an average, while it is 245.69 mg/dl for Karnataka. "While a doctor prescribes medication, a diabetic patient has to manage the disease throughout his or her life. Eating complex carbohydrates such as millets, which digest slowly, are better for diabetics as compared to white rice. Physical activity also improves insulin levels," Dr Bantwal added.

Dr Anil Shinde, Director - Clinical, Medical, Regulatory and Quality, Novo Nordisk India, said, "Despite many drugs and treatment options, glycemic control is not great in India. This could lead to a lot of complications in patients. We are conducting programmes that educate doctors, so that they can in turn educate general physicians on diabetes management. "

Stay up to date on all the latest Bengaluru news with The New Indian Express App. Download now
TAGS
diabetes bengaluru