The South Western Railway Zone (SWR), which used to be among the top railway zones in the country for punctuality, has now slipped down in ranking.

BENGALURU:  The South Western Railway Zone (SWR), which used to be among the top railway zones in the country for punctuality, has now slipped down in ranking.The need to impose restrictions due to doubling and other infrastructure works is the reason, said SWR officials.  Railway Minister Piyush Goyal, Minister of State for Railways Suresh Angadi and all Railway Board officials on Tuesday conducted a review meet of all 17 railway zones in the country through video conference from New Delhi. 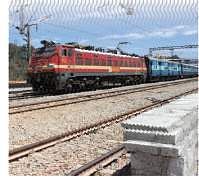 A total of 68 Divisional Railway Managers and 17 General Managers took part in the meet which began at 2.30 pm and concluded at 8 pm. General Manager, SWR, A K Singh told The New Indian Express that the zone had many achievements for April-May 2019 compared to the similar two-month period in 2018.

“A total of 16 level crossing gates have been eliminated compared to three in the corresponding period last year. Passenger and freight earnings have gone up by 15% to `1,012 crore from `882 crore and the production in the Rail Wheel Factory has soared by 111%. We have suffered on the punctuality front but that is due to a strategic decision taken to improve infrastructure,” he said.

Chief Administration Officer, Constructions, SWR, K C Swami said, “We have achieved the promised target of 18 km of doubling while Rail Vikas Nigam Limited has achieved 22 km of doubling between Hospet and Vasco Da Gama. Punctuality has been affected due to numerous ongoing works.”

Stay up to date on all the latest Bengaluru news with The New Indian Express App. Download now
TAGS
South Western Railway Zone