Foundation stone laid 2 yrs ago, no sign of work yet for new BU centre

The state government had announced the study centre to take up research works, and develop a museum and library.

BENGALURU: The foundation stone for the construction of Kempegowda Centre for Humanities and Social Sciences (KCHSS), a project costing Rs 100 crore, was laid two years ago at the Jnanabharathi campus of Bengaluru University (BU). The project was to be completed in 18 months. However, no work has started so far. 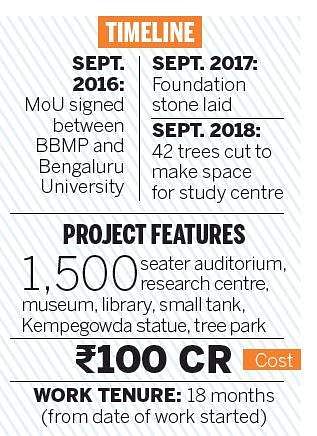 Before the tender can be floated, the proposal has to pass through various departments, after which it comes to the Cabinet for approval. However, the foundation stone was laid in 2017, even before permissions from the various departments were obtained.

The state government had announced the study centre to take up research works, and develop a museum and library. In 2016, an agreement was signed between BU and Bruhta Bengaluru Mahanagara Palike (BBMP) to construct the centre for which three acres of land was allotted.

With a few months to go for assembly polls, the then Siddaramiah government laid the foundation stone at an ostentatious event attended by leaders such as D K Shivakumar and K J George.

“After the ceremony, BU gave its nod for construction, after which it went to BBMP, and its council approved the funds,” a university source said, adding, “It was also cleared by the finance department. At present, it is pending with urban development department. Once cabinet approves it, the tender would be called. That will take 2-3 months.’’

The work was also delayed by the assembly and Lok Sabha polls, due to the code of conduct. Also, KCHSS director N Shaikh Mastan said 42 eucalyptus trees were cleared in September after getting clearance from the forest department.

“We have everything ready, including the funds, and are waiting for the tender to be called,’’ Mastan said.