Born with the medical condition Spina Bifida, he has an incomplete development of the spinal cord and has clubbed feet.

BENGALURU: Niranjan Mukundan, a 24-year-old ‘Bengaluru huduga’, has made the country proud by winning five gold medals in the Norwegian para swimming Championship 2019 (Ado Cup). He was also listed in the Asian edition 2019 of Forbes list (Forbes 30 U30). He is one out of the two Indians to be listed under the sports category. 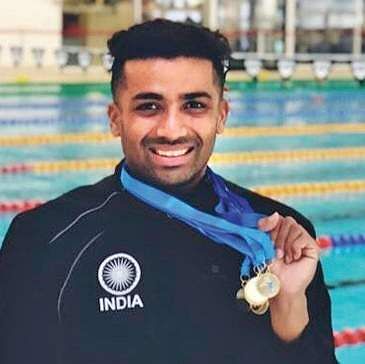 Born with the medical condition Spina Bifida, he has an incomplete development of the spinal cord and has clubbed feet. Mukundan has been fighting against all odds since he started swimming as part of aqua therapy to strengthen his legs. He has undergone 17 major surgeries since birth.“The passion for swimming keeps me going. I have been doing it for the past 16 years. Though the journey has been a rough one, it has made me what I am today, it has definitely given me an identity,” Mukundan added.

He has completed his studies from Jain University and holds a masters degree in sports management from ISST University, Pune. Mukundan added, “My family has always been a pillar of my strength, they have supported me in achieving my dreams on one condition, to go hand-in-hand with academics. I am glad I have been able to achieve both.” Apart from being a para-swimmer, Mukundan is a big-time cricket buff.
Mukundan won National Best Para Sportsperson Award from the government of India in 2015, the Sportsman of the year award by the Sports Writers Association of Bangalore (SWAB) in 2016 and Ekalavya Award by government of Karnataka. He was also crowned as the Junior World Champion in 2015.

He will also represent India in the World Para Swimming Championship 2019 in London. He will be trained under his head coach John Christopher in Bengaluru and by Spanish head coach Miguel Lopez in Thailand till September for the world championships. After winning gold for India in Norwegian para-swimming Championship 2019, Mukundan is in Germany as part of a training camp with the German Para national swimming team.

Stay up to date on all the latest Bengaluru news with The New Indian Express App. Download now
TAGS
Para-swimmer