Sources said some of the animals that are in demand for black magic rituals are star tortoise, red sand boa snake, black kite and slender loris.

BENGALURU: For the most part, poachers are known to hunt animals for their meat and other body parts. It is, however, a lesser known fact that a lot of these animals are killed for blind beliefs such as black magic and animal sacrifices.

Since 2016, the CID cell of the Forest Department filed 100 cases under the Wildlife Protection Act, and 80 per cent of these were used for black magic and vaastu. Wildlife experts say that among the people who use animals for black magic are politicians, many of whom are contesting the Lok Sabha elections this year.

At least 201 poachers were arrested in the state by the CID cell in the last three years.Speaking to The New Indian Express, Honorary Wildlife Warden Bengaluru (Urban) Sharath R Babu said such cases are increasing by the day and added that many cases go unnoticed too. He added that during election seasons, they come across seven to eight cases of animals being injured in black magic rituals. “It’s inhumane how the animals are tortured. Eyes of owls are pierced, wings or claws or the peaks are cut or burnt. Sometimes, clothes of the person on whom the black magic is conducted are tied tightly on animals, which stops their blood circulation,” he said

Sources said some of the animals that are in demand for black magic rituals are star tortoise, red sand boa snake, black kite and slender loris. According to a veterinarian at People For Animals (PFA), Dr Karthik M, said they rescue 130 to 150 animals and birds on an average every month. Recently, an injured black kite was found at Yeshwantpur. “The nails of the bird was cut uniformly and its peak was burnt. This was not an accident but somebody could have done this to the bird to perform a black magic ritual,” he said. 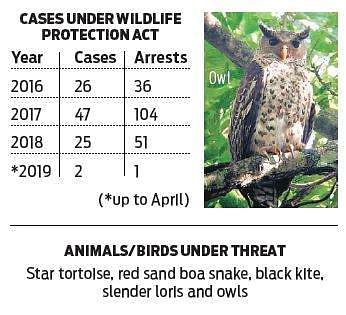 More from Bengaluru.
Now we are on Telegram too. Follow us for updates
TAGS
bengaluru Black magic