Earlier in the day, before the Railway Board cleared the Suburban Rail project, many tweeted demanding the same.

BENGALURU: Earlier in the day, before the Railway Board cleared the Suburban Rail project, many tweeted demanding the same.

The Citizens For Bengaluru started what they called a “Flash Campaign” demanding the suburban trains which created a huge buzz. Citizen activist groups, as well as citizens, tweeted with hashtags #ChukuBukuBeku, #BengaluruSuburbanTrain explaining how Suburban trains can bring down the #Bangaloretraffic.

Some posted stories about problems while commuting without suburban trains in their localities and said that with suburban trains they could reach their place of work early while spending lesser.

Suresh Angadi tweeted: “In order to fast track the #BengaluruSuburbanRail, the Extended Railway Board met today & has given its clearance. In this regard, I assure the people of Bengaluru that Shri @PiyushGoyal Ji & I shall make all efforts to ensure the project is brought to fruition at the earliest.”
Bengaluru South MP, Tejasvi Surya said, “Dear Bengalurians stuck in traffic, here is some great news! Today we’ve TOGETHER achieved important milestone to solve Bengaluru’s traffic woes. 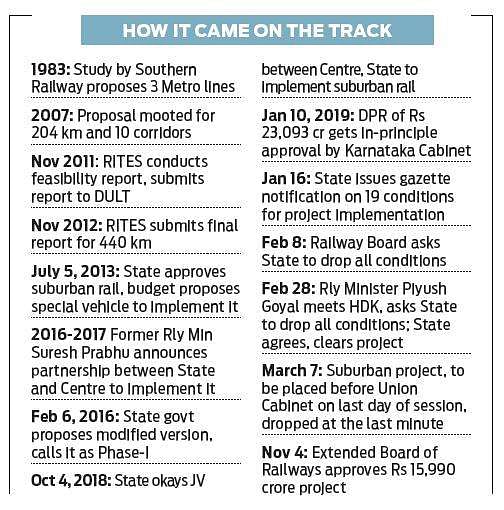 Stay up to date on all the latest Bengaluru news with The New Indian Express App. Download now
TAGS
bengaluru Suburban rail