Vidya V R, partner at the Hamsa Service Station on Hosur Main Road, pointed out that the road had been dug up twice in the past one year, but relaying work was shoddy.

BENGALURU: The Hosur Main Road, one of the most crucial links between South Bengaluru and the IT hubs in the south-east parts of the city, has been in a pathetic condition, posing inexplicable problems to motorists and commuters alike, apart from residents and working professionals on either side of the road.
The road connects various stretches like HSR Layout, Adugodi, Devarachikkanahalli, Madiwala, Koramangala, Whitefield, Electronics City, Parappana Agrahara, and Silk Board and is used by lakhs of people every day. Its condition is so bad that even if the Bruhat Bengaluru Mahanagara Palike (BBMP) does take up repair works, the road will have to be completely closed and the traffic diverted — a scenario which will only create a humongous traffic chaos.

“Roads which are used by lakhs of people every day should be well maintained, but the authorities don’t care. Hosur Main Road is specially bad near Forum Mall and ahead. It is jam-packed and most of the time we can’t see the uneven road ahead and we end up losing our balance on two-wheelers, which leads to accidents. This is why I have now started taking the interior roads to reach home,” said Arun Kumar, a resident of Madiwala. 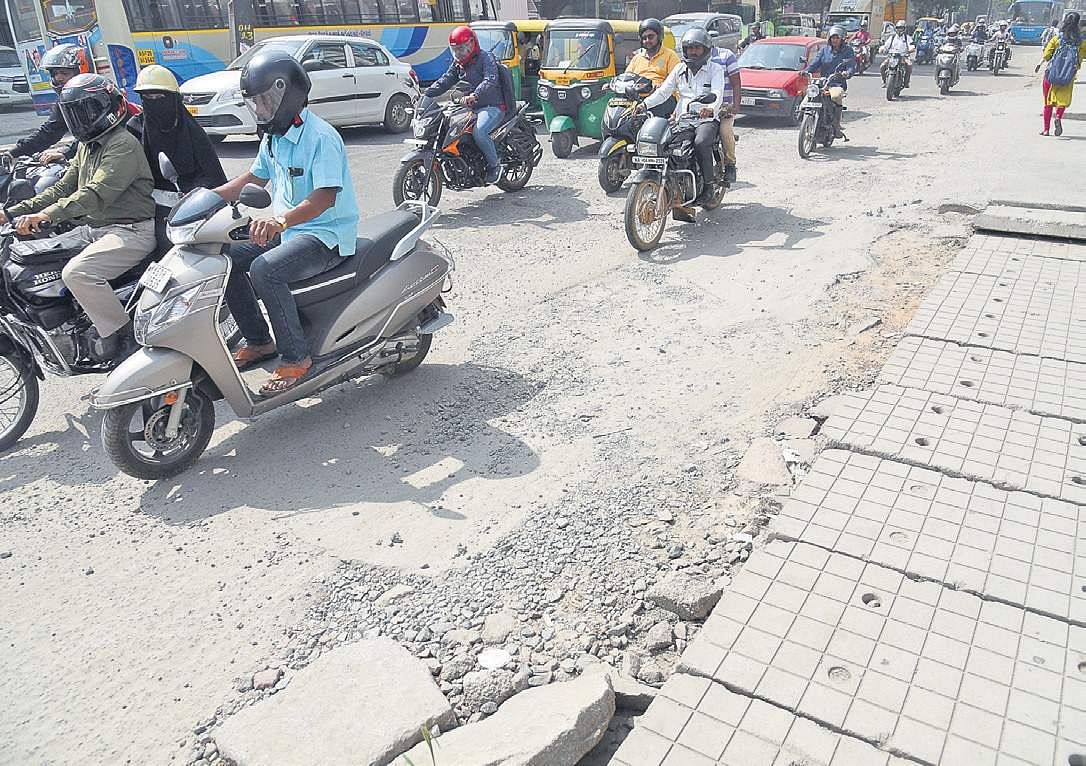 Vidya V R, partner at the Hamsa Service Station on Hosur Main Road, pointed out that the road had been dug up twice in the past one year, but relaying work was shoddy. “Last December, the BWSSB dug up the road to lay sewage lines and the work prolonged for over six months. Just when they finished in July came BESCOM workers who dug up the road again to lay cables. But after they finished work, the road was not relaid by BBMP,” she said.

Mohit L, a second-year MBA student at Christ Deemed University, said, “It is very difficult to travel on this road. I live in Tavarekere which is just on the other side of Hosur Main Road. But due to the bad condition of roads and slow-moving traffic, it often takes more than 30 minutes just to cross the stretch. During peak hours it is even worse.”

Until a few months ago, Hosur Road -- which meets Hosur Main Road just ahead of Forum Mall where Sarjapur Road too intersects, -- was witnessing traffic problems due to white-topping. Much of the traffic coming from west and south-west, and headed towards the IT corridors, started taking Hosur Main Road. However, this road too has turned bad.

A Madiwala traffic police official said, “We had submitted a letter to BBMP about this horrifying stretch over five months ago, but nothing has been done”. However, a senior BBMP official from the South zone said, “The road restoration works are in progress and we fixing all the roads. When we start restoration of Hosur Main Road, traffic will be diverted.”