BENGALURU: For a city that’s fighting to save every existing water body, nothing could have come as a bigger shocker than the revelation that tap water in the city is completely unfit for drinking.A recent report on the quality of piped drinking water in the country, released by the Union Ministry for Consumer Affairs, Food and Public Distribution says that Bengaluru is amongst 15 state capitals which failed the quality standards for tap water. 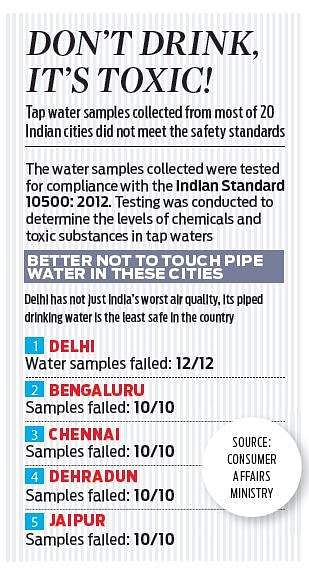 The study was conducted on samples from 21 cities across the country in order to check if the quality of water meet the standards set by the Bureau of Indian Standards(BIS) (BIS 10500).

The water samples were subjected to organoleptic, physical, bacteriological and chemical tests for toxic substances and all 10 samples from Bengaluru fared poorly on all parameters. The only city which topped the chart is Mumbai where piped water was found safe for drinking. In fact, the national New Delhi too fared badly.

“I have no clue about any survey being carried out, nor do I know from which part of the city the water samples were taken.  I was informed about the survey results but I’m unsure who conducted it. I cannot make any comments on it as of now,” Bangalore Water Supply and Sewerage Board Chairman Tushar Girinath.

Managing Trustee and CEO of B.PAC, Revathy Ashok, said, “It is great that the Union ministry has come forward to carry out such a survey. Now we know where the cities stand. The BWSSB must take active measures in this regard. Only 50% of the city gets Cauvery river water and the rest is getting water from other sources like borewells and tankers. Using water supplied by tankers is not suitable at all.”

Dr Brunda M S, Consultant-Internal Medicine, Aster CMI Hospital, said, “There are multiple factors which contribute to the purity of water such as pollution, contamination, preservation and method of consumption. As long as one consumes water that is from a safe source and is hygienically handled, there is no danger to health. Overall, people are aware and careful of their drinking water sources except when it comes to street foods or during the monsoon.’’

HSR Resident Welfare Association member Jairam Reddy said, “The findings of the study are not surprising. Residents of HSR Layout always get bad quality water which is literally brown in colour. We have lodged complaints many times, but it is of no use. We call for water tankers for our basic requirements but the rates are very high.”

Stay up to date on all the latest Bengaluru news with The New Indian Express App. Download now
TAGS
potable water bengaluru