Site asks people to pay Rs 5 as token fee, after which money is stolen from their account

BENGALURU: A fake parcel booking office set up online around three months ago has duped Bengalureans trying to book parcels through trains of sums ranging from Rs 30,000 to Rs 95,000. At least six cases of people being duped came to light this week alone.
Thanks to the intervention of the South Western Railway Mazdoor Union Divisional Secretary K V Raghavendra, the commercial department of the Bengaluru Railway Division has finally taken the issue seriously and issued a warning to the public late on Saturday. 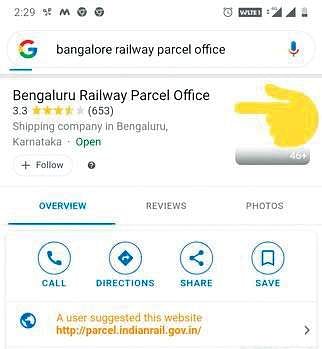 The modus operandi of the individual handling this fraudulent portal — http://parcel.indianrail.gov.in — is pretty simple. A professional website with all possible railway logos on them lend credibility to it with a mobile number listed on it. When one calls the number, he is asked to fill a form and remit just Rs 5 or Rs 10 as a token application fee. Within 10 minutes, their bank account is drained of all the money in just two transactions. Six cases have already been booked at the Bengaluru Railway Division.

On Saturday morning, a differently-abled woman (name not known) accompanied by her husband visited the physical parcel office of the division and both broke down in front of the railway staff. A resident of Banashankari, she was duped of Rs 92,000 on Friday after she paid the mandatory Rs 5 to fill the forms. “She wanted to send parcels within the state and got cheated. They are desperate for their money as they had saved it with great difficulty by working in ordinary private firms,” a railway official said.

Prashadant Ingale, who works with a start-up, was a victim last week. He told The New Sunday Express, “I approached the commercial section of the Bangalore Railway Division last week but they did not take the case seriously at all. Only after they started getting more complaints did they reach out to me again later.” Ingale paid Rs 10 to book his bike from KSR railway station to Kolhapur in Maharashtra. “I paid Rs 10 online and within 5 minutes I was robbed of Rs 32,000 in two separate transactions,” he explained. Ingale filed a case with the cyber crime police station a week ago and a copy of the FIR is with TNSE.

An IT professional Richa Chouhan had highlighted the issue as early as October 11 stating that she lost Rs 95,000 due to the website. She had even tagged the Prime Minister with screenshots of the website.
Raghavendra said even the reviews on the website speak of many being duped. “Despite this warning, the public gullibly share all details and try to book their parcels easily,” he added.
When asked about the issue, the cyber police seemed clueless.

B’lore Rly Division has no online parcel office
A senior official of the commercial department of Bangalore Railway Division said the city has major parcel offices at KSR Railway station, Yesvantpur and Cantonment railway stations only. The customer has to visit these offices to send or receive parcels, he said. He also cautioned the public against using the number (7679052535). The number is answered by one Rakesh Sharma. The caller sends a link and when the customer responds to it, the bank account is emptied, he said. Indian Railways can only be reached on www.indianrailway.gov.in. In Bengaluru, the public can call 080-26707731 or 080-26703448 for any queries related to booking of parcels.