A lot is brewing at these outlets this Oktober fest. Before it culminates this Sunday, we line-up some popular places where you can get a feel of the season

Brew with a view
This four-letter word is simple but has a plethora of feelings attached to it. Beer aficionados in the city will be spoilt for choice at this celebration of brews. With a stunning view of the city and German food, including pretzels, sausages and cheese platters, this place will have you grooving throughout.
Where: High Ultra Lounge, Malleswaram
When: Till October 31 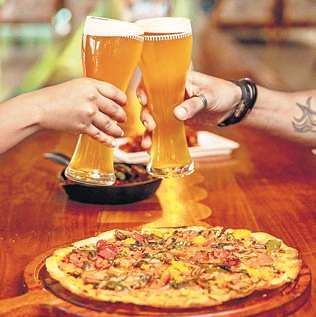 Celebrate with cocktails
This micro-brewery on Outer Ring Road has celebration for beer lovers in full swing. With two special beers brewed for Oktoberfest, the variety of brewed beers include October Pale Ale, Hoppy Pilsner and Marzen. Don’t forget to check out some cocktails like Fatty Godfather, Smoke and Maple, Abra Cadabra and Barbeque Mary.  Munch on some bar bites like Potato Pancakes, Sauerkraut Bites, Brats with Mustard Sauce, Cresent wrapped Bratwurst Bites and German Chicken Schnitzel.  Where: Brew and Barbeque, Soulspace Arena Mall, Outer Ring Road
When:  Till October 6

Limited edition
Indulge in a beer affair at The Reservoire, which has a special range of beer cocktails like Witty Granate, Bloody lager, Blue Moon, Jager Lager, Chocolate Lager, Green Chiller, Hells Kills, Hangover and many more. The festive menu also includes the likes of German Potato Salad and Currywurst.
Where:  The Reservoire, KHB Colony, 5th Block, Koramangala
When: Till October 6

Traditional tales
This beer festival, relish specially-curated food like Chicken Ceasarole, Roasty Chicken Sausages, Baked Chicken Hot dog, Criss Cross Crispy Pork, Braised Chicken and Pickling Pork. To celebrate the spirit of the festival, Communiti has brewed a traditional beer, Marzen, which is distinguished by its strength and taste. Check it out.  Where: Communiti,  Residency Road, Ashok Nagar When: Ongoing

Perfect pairings
This South Bengaluru’s brewery has come up with an unusual flavour of beer called Maibock. This exotic beer with a hint of jackfruit promises to send your tastebuds on an over-ride. You can pair it with a scrumptious sausage platter with Chorizo, Pork Currywurst, Chicken Currywurst, and Chicken Frankfurters. Brewmaster Scott from the US is the brain behind this jackfruit speciality brew. Spread across a massive area of three storeys, with a retractable roof, this place will give you a chance to unwind with a view.
Where: The Pump House, JP Nagar, When: Till October 6