Elephants are smart mammals and find unique ways to break through barricades.

BENGALURU: Elephants are smart mammals and find unique ways to break through barricades. So while the Forest Department has given up on trying to find methods to keep the gentle giants within barricades, it is now looking for technological interventions on how to alert locals and cordon off areas so that there are no casualties.

One such technological intervention is ‘Matam’ (monitoring and trip alert mechanism), through which real-time SMS alert can be sent to forest officials and locals about elephants approaching and breaching barricades. 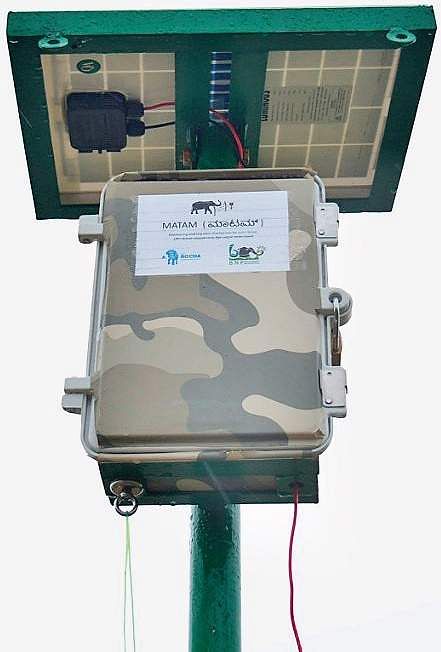 Matam has been developed by team Arocha, an NGO, and forest department officials. It is being tested for the last two months at Ragihalli in Bannerghatta National Park (BNP).  It is a technological tool which assesses the implications of a real-time elephant-proof barrier monitoring mechanism for mitigation of man-elephant conflict. These are small sensors which are attached to existing solar fences. They give a real-time alert through an SMS to all forest officials and villagers nearby that an elephant is approaching.

In the last two months, 12 alerts have been given in the Ragihalli beat. Forest officials, Arocha team members and locals said the alerts have been working well whereas chilli-tobacco fences, barbed wires and solar fences have done little to keep elephants at bay.

BNP Deputy Conservator of Forests told The New Indian Express that so far, sensors were tested for only one season. “All-weather testing needs to be done. Then a final report will be submitted to the head office for implementation across all forest patches where solar fences have been erected.”
He said that it is a good warning system. This method of informing locals and the department staffers is good.

Avinash Krishnan, research officer, Arocha India, said the current project is aimed at improving the detection of breaches on fences caused by elephants by developing a prototype which would enable the frontline staff to receive information, via SMS, on a real-time basis. Apart from breach detection, the device also monitors the status of the solar fence.

He said two locations with notably high excursions of elephants were selected in Ragihalli beat of BNP for the deployment, testing of these devices spanning a segment of 250m along boundary-barrier.

Now we are on Telegram too. Follow us for updates
TAGS
Forest Department Arocha NGO Bannerghatta National Park