City-based theatre group brings Shakespeare’s play in Kannada; the 90-minute show will also feature the bard as a character

BENGALURU: William Shakespeare’s plays have been interpreted in myriad ways but this version of The Tempest takes things a step further. Imagine a scene where two of the bard’s characters are involved in a heated conversation and suddenly, out comes the playwright himself. Produced by 31-year-old amateur theatre group Sanchaya, the play will be performed in Kannada and will feature Shakespeare taking to the stage as one of the prominent characters.

“We have Shakespeare playing the narrator who comes out on stage during important moments. Since he’s the original writer of the play, the director, Joseph John, thought it would be interesting to have him justify his thoughts and the deeds of his characters to the audience,” explains Keerthi Bhanu, one of the founding members of the theatre group. 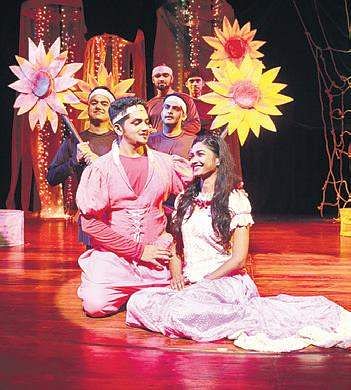 The play’s Kannada translation was done by Srikanth, scriptwriter and a member of Sanchaya, which took two months. According to Bhanu, this could have been a tricky task since original works can have powerful terms or words and one needs to find the right equivalent term to retain the essence. “At the same time, we’ve also tried to make the dialogues more local. So, Caliban refers to Shakespeare as ‘kavigale’. And instead of a poetic delivery of dialogues, we decided to bring in some regular diction instead,” says Bhanu, who also leads the musical aspects of the play.

Twenty-one actors are a part of the 90-minute play, which relies heavily on music to bring out the story. Featuring original compositions, the production will have a crew performing the music live, with a mixture of instruments that include the harmonium, dholak and djembe. For example, the opening scene where Prospero recounts how he was betrayed by his brother is all narrated through a song. “Even Prospero’s powerful soliloquy about letting go of his need to seek vengeance is set to the background of an alaap,” explains Bhanu.

While one of the reasons for choosing this particular play was its ability to lend itself well to musical situations, the other was the novelty of working on one of Shakespeare’s last written plays. Says Bhanu, “Sources don’t confirm it but it is believed to be one of the playwright’s lasts. Besides that, plays are usually based on his more popular works like Hamlet, Macbeth or Othello. We wanted to stage The Tempest since not many have attempted it before.” The play will be staged at Ranga Shankara on Oct 16 at 7.30pm.