The recent human and cattle killings in the Bandipur Tiger Reserve have exposed the sheer lack of action on the part of state government.

BENGALURU: The recent human and cattle killings in the Bandipur Tiger Reserve have exposed the sheer lack of action on the part of state government. With people living in the vicinity of protected areas (PAs) scared and unable to carry out their farming activities, the situation is critical. Further, with the lack of scientific documentation and forensic analysis to curb such killings, the government needs to post wildlife veterinarians in the reserve.  Despite rising conflicts in 140 villages bordering the PA, specialized facilities to deal with incidents are inadequate while the vet in-charge is headquartered at Mysuru and not Bandipur. If conflicts have to be resolved, the Forest Department needs to pull up its socks and take immediate measures. 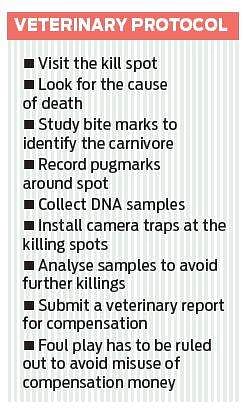 Jospeph Hoover, former Karnataka State Wildlife Board member says, “People are agitated as they cannot take their cattle to graze. With more than 25% of big carnivores spilling out of the PA, the situation is critical. The government cannot take things lightly.”

From March to September, 14-21 cattle deaths were reported but no field visits or forensic studies were done to identify or catch the culprit. Human killings will bring a bad name to tiger conservation, activists add. A wildlife expert said, “The vet assigned for Bandipur did not carry out veterinary procedural protocols and failed to visit the scene of killings. If he had done so, the forensic analysis would have revealed the identity of the tiger and prevented human killings.”

Forest officials concur Bandipur that urgently needed a dedicated vet who is a wildlife forensic expert and capable of tackling serious conflicts. They said that if measures were not taken soon, the killings and captures of big carnivores may increase. Experts add, “There is a need to adhere to the ‘Veterinary Procedure Protocol’ as the present case has been resolved based on circumstantial evidence-pug marks and tiger stripe patterns-as there has been a total failure to collect DNA samples. If the sample of the first kill was not collected, it was due to the absence of a vet on the spot while in the second kill, the samples were collected as the department got its act together and posted a team of vets to identify/capture the tiger. All this could have been avoided from the first day of the cattle-killing if samples were analyzed, thereby, avoiding any human kills.”

A vet is supposed to visit the spot and collect samples and record vital signs of how a kill occurred. A source adds, “He/she measures the distance between the bite marks. Measure the length, width, depth of the wound to know whether a tiger or a leopard has killed the cattle. Pugmarks have to be analyzed, DNA samples need to be collected and more camera traps need to be installed to identify the animal. However, this did not happen.”

Man-animal conflicts can be stopped by posting vets and using scientific data and analysis as per NTCA protocol, an expert said.