Reddy added that Metro is important for the city, but the civic agencies must ensure that the roads around the ongoing construction sites are well maintained.

In the letter, a copy of which is with TNIE, the MLA sought their immediate attention where Namma Metro work is going on between Central Silk Board and Jayadeva Circle, JD Mara to Dairy Circle and Jayadeva Hospital Circle to RV Road. Reddy said, “I have been requesting the officials, corporators, MPs, MLAs and ministers for the last five months, but nothing has happened. I also did an inspection and then decided to give a written complaint.” 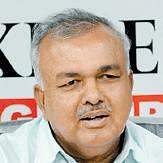 Reddy added that Metro is important for the city, but the civic agencies must ensure that the roads around the ongoing construction sites are well maintained. Already the road width reduces because of the work, and bad roads only make matter worse. “The letter was sent to the departments and chief secretary on October 18, after which BMRCL and BBMP got back to me and assured me to fix the potholes,” he added. The poor road condition is not just a complaint from Reddy, but from commuters on a daily basis.

It may be noted that while the BMRCL and BBMP have said that due to monsoon, road repair works cannot be done, commuters and the minister said good roads are most required only during monsoon.
Mayor M Goutham Kumar had inspected Bannerghatta Road and surrounding areas a week back to take a first-hand report of the bad road condition.

Kumar said, “Road repair work has to be done by BMRCL and the commissioner has also told it to do so immediately. I have also called a meeting with the BBMP, BDA, BWSSB and BMRCL to ensure that they work together and repair the roads.”BMRCL spokesperson Yashwanth Chawan said wherever required,  roads are being repaired and potholes are being filled. The letter sent will be examined and action will be taken immediately.

Now we are on Telegram too. Follow us for updates
TAGS
Ramalinga Reddy BBMP