Recently, civic activist Kathyayini Chamaraj made headlines when her foot got caught in a broken footpath on Berlie Street, and she fell down.

BENGALURU: Recently, civic activist Kathyayini Chamaraj made headlines when her foot got caught in a broken footpath on Berlie Street, and she fell down. This brought the Bruhat Bengaluru Mahanagara Palike under much heat from citizens. Last week, she received another shock from the Palike — she was removed from the post of ward committee member of Shanthinagar ward (117). She along with three other citizens were removed from the committee.

Ironically, she was one of the activists instrumental in pushing the BBMP and citizens to form ward committees (WC) and have meetings. 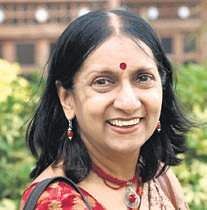 “I was unceremoniously removed from the ward committee. Some of us were very vocal in raising issues. This possibly angered the corporator P Sowmya’s husband, Shivakumar. In the past, he threatened to remove some of us from the committee if we spoke out too much but became civil later on. I did not expect my removal and got to know from him, at our October ward committee meeting last Saturday,” Kathyayini  Chamaraj told TNIE.

“He told us that he had moved the file for our removal in February itself and it got approved by the council in April. I questioned him on where in the law it says that one can remove a WC member. As per the Karnataka Municipal Corporations Act, the term of the WC is co-terminus with the term of the council. It is not clear as to what this means,” said the social activist, who is an executive trustee at CIVIC .
While there is no provision in the law to remove a member unless they are disqualified for doing something wrong, it also does not say that a member cannot be removed.

“They used the loopholes in the law to get me removed. I would keep reminding the corporator and even the Joint Commissioner on WhatsApp to hold the WC meeting, send the notice seven days in advance, post it in a public place as per the act. They did not follow most of these procedures, and would often try to hold it on a weekday or inform us only a day before the meeting,” she said, adding that the attention she received after hurting her leg may also have irked them.

In May she filed a PIL in the Karnataka High Court seeking interpretation on how WC members should be nominated, who should nominate them, what the guidelines are, who can remove members and how.

Reacting to the development, Shivakumar, husband of corporator Sowmya, who is also a ward committee member, said,  “She and three others were not removed owing to any personal issues. There were several areas in the ward such as Anepalya, Johnson Market and others which did not have any representation from people. They will not get to raise their issues if they dont have WC members from there.”

“The corporator is the chairman of the committee and has the power to remove any member at any time. We can change members every year to get equal representation from all areas. This is a democratic process. We’ve learnt about rules surrounding WCs from Kathyayini and do not have any anger against her. She may even be brought back,” he added.