Blending the old and new

Rahul V  Mathew’s 14-piece artworks imagine a parallel universe, one where the subjects of Raja Ravi Varma’s paintings from the 1800s find themselves living in modern-day Mumbai

BENGALURU: Picture this: A young Krishna crying for fries instead of butter outside McDonald’s. A well-dressed Menaka and a naked Vishwamitra at a tailoring shop, presumably waiting to get clothes stitched for the saint. City-based artist Rahul V Mathew’s recent series transports you to a parallel universe of sorts, thanks to its blend of paintings made by Raja Ravi Varma in the late 1800s set against modern day contexts and backgrounds.

The works are titled Varma’s Printing Press In Bombay, where the idea was “to see how the old and the new interact with each other,” says Mathew, 23, a recent graduate from Srishti College of Art, Design, and Technology, who now works as a designer with an online food delivery platform. 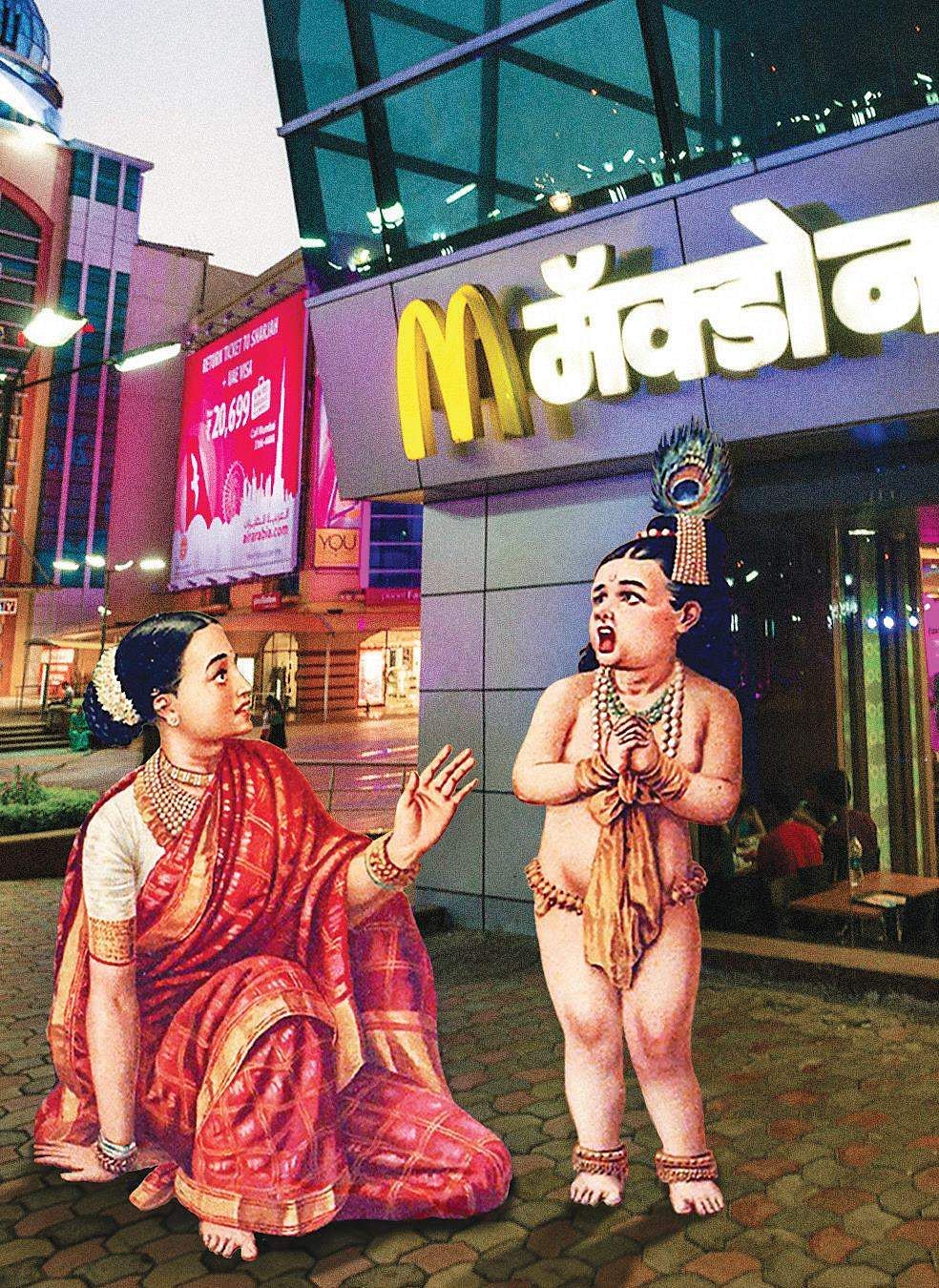 The impetus for the project came from his visit to Hasta Shilpa Heritage Village in Udupi, a museum that restores and preserves traditional buildings from different time periods. This is where he learnt about Varma’s printing press. “The press kicked off the mass production of art. It was located near Lonavala. Maharashtra, so, I thought of experimenting by setting them against modern-day Mumbai,” explains Mathew, who hails from Kochi.

It took him a day to work on each artwork of the 14-piece digital collage collection. The biggest challenge, he says, was putting the paintings in contexts where they could trigger a response from people. While the modern and traditional blend in each piece, a closer look shows that there’s a lot more at play. For example, the portrait of Krishna and Radha at a dhobi ghaat is captioned, ‘Radha I’ll wash the rest’.

“I wanted to drive subtle messages of social change through these works,” says Mathew, citing the example of the Kali painting, which comments on the nuisance of public spitting. “The piece with Menaka and Vishwamitra also comments on gender equality. It is acceptable for Vishwamitra to not don any clothes but the same is not allowed for Menaka. I then decided to place the two in a tailor’s shop and captioned it ‘Menaka getting Vishwamitra some clothes stitched’,” he adds.

The Kali artwork is the most popular, with 1,345 likes on Instagram, where Mathew shared his work. Calling it a ‘personal project’, he says he never saw it getting such an overwhelming response. “I just wanted people to connect with it,” says Mathew, adding that while he has no immediate plans to exhibit the series, he wouldn’t rule out the idea.