National Crime Records Bureau data shows that love affairs are one of the biggest reasons for murders.

BENGALURU: Case 1: Mother of three killed her husband with her boyfriend’s help. She developed an affair with the Assistant Sub-inspector of a Mandya police station to escape from the case. She evaded arrest for almost three months.

Case 2: Husband involved with another woman. When the wife found out, she decided to pour boiling oil over him.

Case 3: A woman killed her husband’s friend, hitting him on the head with an iron rod in Rajagopala Nagar after the man forced her into an extramarital affair.

Case 4: A man bludgeoned his sister to death in Indi, Vijayapura, after he found her having an extramarital affair.

All of these in a month’s time.

Any which way you look at it, love, or rather feeling cheated or betrayed in a relationship, often becomes fatal for those who have done the cheating.

With 1.35 lakh registered users, the highest for any city in the country, Gleeden, a website for extra-marital dating, found that Bengaluru is India’s ‘infidelity’ capital. Of these, 43,200 are women (‘looking for freedom and excitement’ outside their marriage) and 91,800 are men.

National Crime Records Bureau (NCRB) data shows that love affairs are one of the biggest reasons for murders. In Karnataka, Delhi and Tamil Nadu it was the second biggest cause of murders that took place between 2001 and 2017.

A senior police officer agreed. “Infidelity is a major reason for the crimes. Whenever there is an attempt to murder among youngsters it turns out to be either be old rivalry or an issue regarding a girlfriend. When it’s married people, our first task, unfortunately, is to find out if the person attacked or killed has had a history of affairs,” he said.

Bengaluru’s police-run helpline Vanita Sahaya Vani gets about 40 complaints a week, with people complaining about affairs and the damage it does to marriages.

The city crime records bureau (CCRB) shows that many murders are committed by either the husband or the wife to eliminate his or her cheating partner, the paramour and, shockingly, even children.

“In 2018, 14 murders involved adultery and about six involved love intrigue. In 2019 there were 13 attempts to murder with love intrigue as reason,” said ACP Lakshmiprasad of CCRB.

Family and marital counsellor Ashwini A says, “Love is a killer. Unfaithfulness is tough to handle and some people harbour too much anger and resentment after they feel cheated in a relationship. Mobile dating apps, boredom, lack of communication between partners, fear of rejection, issues around acceptance are some of the reason behind the affairs. Couples need to spend time with themselves and refrain from usage of gadgets and have control on letting their moral and social boundaries loose.” 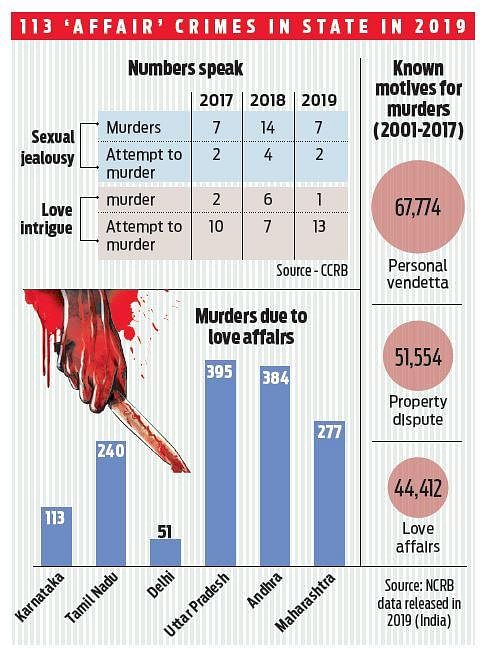