Trek it or leave it: Skandagiri ‘hot’,Rani Jhari not

BENGALURU: The 40-km route of Skandagiri is the most preferred by trekkers and the recently compiled statistics by the Karnataka Eco-Tourism Board confirms this. Between August 2017 and January 2020, as many as 27,017 trekkers have visited Skandagiri in Chikkaballapur, followed by 9,706 to Makalidurga in Doddaballapur. However, only three people trekked the 15-km trail to Rani Jhari.

“Most of the trekkers are from Bengaluru and they prefer the hillocks of Chikkaballapur and Doddaballapur because of the easy accessibility. Skandagiri is the most preferred as it’s a good spot to watch the sunrise. Also, even though Rani Jhari offers a good scenic view, the footfall is the least. It has also been noted that very few people visit Bandage Falls in Chikkamagaluru but a good footfall (2,033) is
reported at Ettinabuja,” said Assistant Conservator of Forests Ramesh, from Eco- Tourism Board. 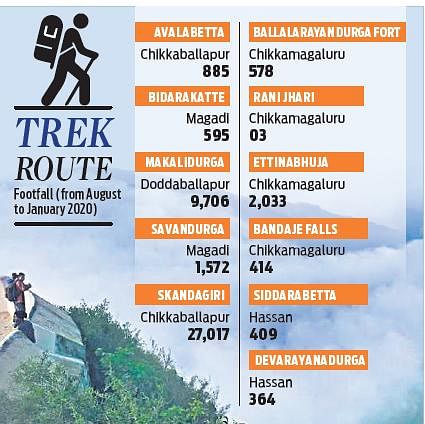 Some board officials have also noticed that there is a lack of interest from the circle forest department officials to promote trekking at the listed sites. “There are 11 regulated and recognised trekking sites listed by the board, but the places around Bengaluru get a lot of traction because the forest officials in these places promote them. However, that does not seem to be the case with Hassan and Chikkamagaluru circle,” said another board official.

The Board officials have also found that at many locations like Devarayanadurga, Avalabetta and Siddara Betta, the footfall is not regulated as many people enter stating that they are visiting the temple on the hillock. So  less footfall is reported. Now with the increasing footfall to the hillocks of Skandagiri and Makalidurga, the Board is planning to open more trek routes as the carrying capacity to each site is defined and cannot be increased.

“There are many illegal trekking places. Some are under the forest department which can be explored like at Kunti Betta in Pandavapura), Tadiandamol (highest peak in Madikeri) and even in Kudremukh. The divisional forest officials are preparing a list of 30- 32 places where more trekking routes can be opened,” the official said.

The Board is also working on training many naturalists to be ready when more trekking routes are opened up. The training programme will be completed in a month’s time and then at least a 100 more will be added. The trek routes in MM Hills and Bannerghatta National Park have been closed because of elephant and tiger movement and sightings.