Grieving for the gentle giant

The story of the 15-year-old pregnant elephant in Kerala who died after eating a pineapple stuffed with fire crackers has left a large number of people in distress.

BENGALURU: The story of the 15-year-old pregnant elephant in Kerala who died after eating a pineapple stuffed with fire crackers has left a large number of people in distress. The who’s who of the city are no exception. Many Bengaluru’s celebrities have taken to the social media to express their grief and disappointment. Actor Samyuktha Hornard, who has always raised her voice against animal cruelty, didn’t waste a moment this time either, and pointed out the need for having stricter laws for protection of wild animals. 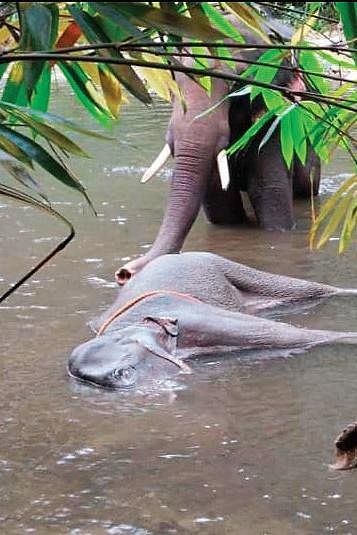 “According to Section 428 of IPC, which was formulated in 1960, killing of wild animal invites a fine of only `50 , which is ridiculous and need to be changed. Feeding and domesticating wild animals is illegal and it can’t be taken lightly,” Hornard tells CE. “When you think you have control over another life and incidents like animal sacrifice happen in the name of beliefs, it’s nothing but people showing their superiority,” she adds.

Reports have emerged that the cracker-stuffed pineapple was meant for wild boars and the elephant consumed it by accident, but that too does not justify the act, says Anup Kattukaran, an underwater filmmaker and photographer. “What if a human child had picked up the fruit? Sure we can argue about the loss of crops that farmers go through but we need to understand that the conflict between human and wild animals will be an issue for as long as we encroach into their space,” says Kattukaran, who posted a picture of the elephant clicked by him as a tribute after the incident came to light when a forest officer, Mohan Krishnan, wrote a Facebook post about how the elephant rushed to the nearby Velliyar river after eating the fruit and died there even as forest officials rushed to rescue it.

Agrees actor Shubra Aiyappa, who mentions that she is still shocked with the news. “I come from Coorg and I have seen bison, wild boar, etc coming to our estate. There is always a way of doing things. Even if it was meant for some other animal, it was an inhuman method of doing things,” say Aiyappa, who posted a write-up on Instagram on the day the incident was reported.

She wrote, “My heart is bleeding as I write this . We are capable of conducting such an act of atrocity ? What kind of sadistic pleasure would one get watching a pregnant, innocent harmless creature undergo such pain . Haven’t the current times taught these barbaric monsters any lessons of empathy and love ?? Shame on us to have this kind of power and then misuse it. (SIC)”Talking about the discussions over the location of the death, Kattukaran adds, “That’s just not done. Starting a hate campaign between communities is just stupid.”