Set in pre-corona times, this book by Sriram Devatha is about stories of Indians across the world

BENGALURU: A taxi driver navigates a young tourist couple through the tumultuous terrain of Egypt, as the country grapples with its fast-changing realities. A veteran retraces the shift in his ideological journey along the 38th parallel in the Korean peninsula. A film producer’s wife contends with her husband’s possible infidelity in the time of MeToo...

These are the stories that you will find in author Sriram Devatha’s book, Indogene, where as he himself says the reader will zip from country to country and continent to continent, on a whirlwind literary tour of the world. “I’ve tried to combine history, politics, law and religion, to share stories of Indians dealing with life, love, and loss away from the shores of their home country,” says Devatha, 31, who is also a German language trainer, audio engineer, entrepreneur, poet, author and now a budding acoustician. 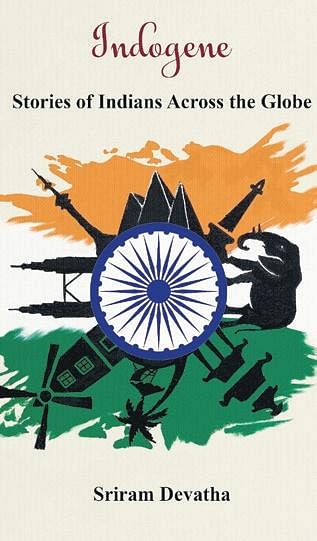 The stories are set in a pre-corona world which, he says, had integrated to an unimaginable extent. However, in this moment of gloom and doom, this book can provide the short escape that ma of us probably need at this time. “Through the book, I want to illustrate how far and wide the Indian civilisation has spread. For example, the most populous ethnic group in Suriname in South America  is of Indian origin,” he explains.

As a writer, Devatha feels it is important to sometimes plant an idea and let it take root in the background. At the same time, he points out that writing as regularly as possible– with a fixed number of words per week– helps polish the craft of writing. While the book was supposed to come out last year, it was pushed owing to other commitments.

“Thanks to COVID-19, I found this time of gloom to finally finish the book. Finding publishers was the next big task with most of the popular publishing houses receiving hundreds of manuscripts every month, it’s pretty tough to get responses and they all typically tell you to wait for at least three months for a response,” says Devatha who then self- published the book.

While the obvious challenge was the act of sitting down and writing, Devatha also had his share of frustration during writer’s blocks.  “For instance, in the story #sinetronscandal the ending of the story was something I wasn’t happy with. So I moved onto another story and came back to it after. My advice is to not let the frustration of a block build up,” says the city-based author. A sucker for desserts with his all-time favourite being a rainbow cake with its different colours and layers, Devatha extends that to his works too. “This fascination with layers and different shades was my inspiration for Indogene. I wanted to pack many interesting elements in each of my stories,” he says.

Now we are on Telegram too. Follow us for updates
TAGS
Indogene Sriram Devatha