Vaishnavi Biyani nearly had a breakdown when she lost her job due to the ongoing pandemic.

BENGALURU: Vaishnavi Biyani nearly had a breakdown when she lost her job due to the ongoing pandemic. Having found out in April, the 23-year-old former community associate spent the next few weeks furiously applying to jobs but to no avail. “That was when my friend suggested I start my own food business since I loved culinary arts so much,” says Biyani, who has now set up Con Amore (Italian for ‘with love’), a venture that has her making homemade preservative-free artisanal pasta. 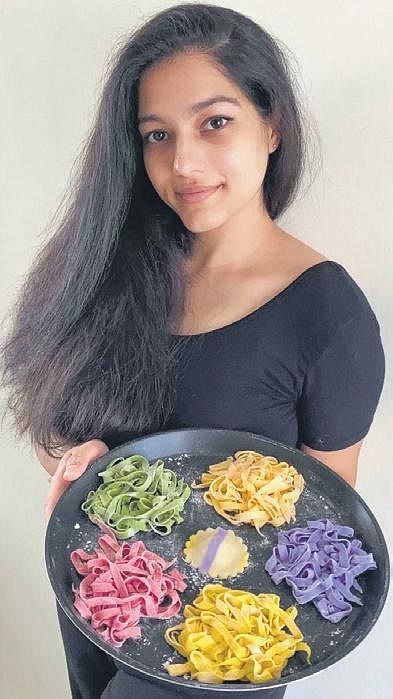 While her love for food has been a long standing affair, Biyani’s tryst with pasta making, surprisingly, is new. “It was quite spontaneous. My friend shared a post about pasta making and overnight, I decided to launch this,” says the youngster, who now dispatches 4-5 orders a day, amounting to anywhere between Rs 2,000 to Rs 2,500.

While the plan was to eventually move fields and open a cafe in December this year, Biyani decided to go with the flow and take the plunge a little early. “But this was a good time to start, since people would crave good but affordable restaurant quality food at home,” she says. Biyani ensures this through various means – coloured fettucini and ravioli makes the meal more appealing and no preservatives makes it healthier (the colours are obtained through natural food dyes like turmeric, red peppers, carrots, purple cabbage and spinach). “It also takes only 2-3 minutes to cook, as opposed to the 15 minutes of boiling packaged pasta takes,” she says, adding that 12 pieces of ravioli retails for Rs 300.

Since she began last month, the venture has been nothing but a daily adventure – one that is filled with many lessons for Biyani. Calling her first week with the venture unorganised, Biyani recalls how she slept only four hours a night. “I was new to the process. All the dough kneading and sheet rolling was done by me,” she says, adding that sore arms and red palms were a regular feature during those days.

Having now invested in a stand mixer and a pasta machine, she has a easier time and is enjoying the work as well. “It feels less like a job and there’s a lot more satisfaction. On my second day I was close to quitting because of the exhaustion. But a customer told me she loved the pasta and some days later, she placed an order again. And I knew this would be worth it,” says Biyani, who will soon introduce a three-hour slow-cooked pasta sauce as well.